I’ve been living in Makati for a little over 3 years now, and to be honest I have yet to find my go-to salon. Such a place that the mere mention of its name would send me happy thoughts of relaxation and peace… There is one that I could go to before that would be open until 10pm, and it was also a derma clinic. It was ok, but it got pretty cold with their over-powered A/C blaring and sometimes there were roaches crawling around near my reclining chair late at night while I got my foot scrubbed.

Then a friend started talking about this “parlor” somewhere near Bel-Air in Makati. From how she described it I wasn’t exactly excited. Picture your small town parlor, with bright fluorescent lights, foamed chairs, smell of hair chemical circling around the tiny room, mirrors, cramped spaces, etc. I’m sure at some time in your life you’ve at least seen one before. She just kept on raving and raving about it. That they do manipedis in a flash, like in between lunch breaks…and they can even do house calls…and they open as early as 7 pm, para sa mga gusto magpa-blower ng hair before going to work…

Finally, last Saturday, during a particularly funky time, and amidst rushing to prepare my house for guests in the evening I just realized I’ve had it with my ill-manicured nails and I deserved an EFFIN’ break from all the drama and hassle. With the help of B, who booked everyone a day before (though I was just penciled in), we had a little manipedi party at 11am Saturday morning at BBFH. BBFH stands for “Be Beautiful For Him” — and yes, I was wide-eyed too when H first told me what it’s actually called.

One time while seated at the back-seat of the car, M and I were talking and making plans to have nail-spa day, and C of course butted in:

I still haven’t been, but all these guys have been raving about it!

Even A and F (boyfriends of H and M, respectively) went and

they really liked it.

M&S: (in unison)Be Beautiful For Him. 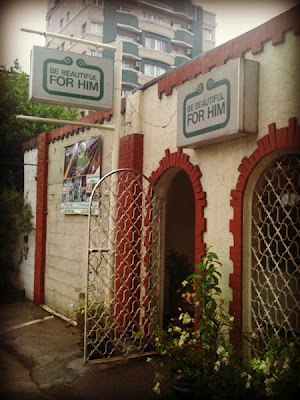 So anyway, BBFH is a small parlor. It has a tiny door, tiny space, but full to the brim! And since they knew that we were a whole group of girlfriends coming in, they found a way to move the people around and get us all to sit side by side. And then… parlor heaven… Women working on my hands and feet, giving me light massages here and there, while I gossiped with my girls, the sound of hairdryers in the background… and it was lovely! Men do go there, and I saw one maybe middle-aged man getting his hair-cut there, and I think they even gave him a shave. The staff is all women, and they gossip too (no names of course…). They move quick and seamlessly, and the next thing I knew I was done! The price? Extremely affordable. You wouldn’t believe it. My straight-up mani-pedi with polish, including foot-soak and a little massage was only P280. I think dun ako pinakanatuwa.

We were thinking of having Hendrix during the parlor party, but reason got the best of us, and we decided that it’s a little too strong for Saturday mid-day…so after BBFH, we headed to Powerplant which was one tambling away, and had pizza AND a bottle of prosecco — we just wanted the buzz and the good feelings to stay a little longer.

In the end, the most important thing really when it comes to beautifying is that you feel good about yourself, and you come out of the parlor feeling you’re as beautiful as you are meant to be… that and C liking the color of the nail-polish I chose.