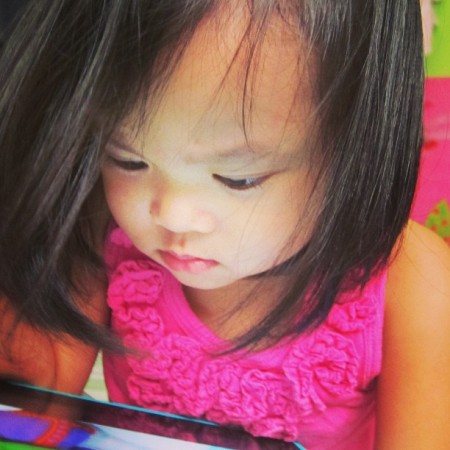 If you have been reading my entries about Baby A, gets niyo na isa siyang hyper na bata.

When she turned 2 last September, I noticed that she was different from other toddlers. Hindi siya masyadong nag-interact with other kids. Super pili lang. Like during her birthday party, she kept on running lang sa aisle. Mga 3 lapses around the aisle ang speed, tuloy tuloy lang.  She spoke  few words also compared to other kids. I was starting to worry but chose to believe that it was only normal, and that she will progress later on.

When Yolanda hit Leyte, we flew our relatives to Manila. One of my cousins, who’s a teacher in a school for special children talked to me. She said that I should pay more attention to Baby A’s behavior because she might have Attention Deficit and Hyperactivity Disorder (ADHD).

She asked about Baby A’s daily routine and gave me some advice on what I should do. First is to see if Baby A can focus on a task. That way, we would know if she has symptoms of ADHD. Papa O and I asked her to read a book with us and to paint a ceramic animal. She didn’t focus on the reading part but she did on the painting.  I felt slightly relieved, but I know I had to learn more about ADHD.

After reading about ADHD, I did three simple things which resulted in three major changes in Baby A’s behavior:

1. Limit use of gadgets.

We deprived Baby A of her iPad for a week. I found it necessary for her to be separated from her iPad after reading this article:

When kids play games, they rack up points, move to higher levels and unlock characters and goodies, and their brains are rewarded by one thing: dopamine, a neurochemical that’s released every time they “win.” That sensation of pleasure is often the reason they love electronics, and some experts even believe they seek out gadgets because they have problems with their natural dopamine systems.

Medication, like Ritalin, attempts to control ADHD by increasing dopamine activity, the Wall Street Journal reported, so when Josh plays Minecraft, it’s as if he’s self-medicating, giving his brain that extra boost of pleasure that his internal circuitry doesn’t release.

That’s why separating Josh from excessive use of his iPad isn’t easy. To make matters worse, when kids with ADHD are ridiculed and ostracized, the isolation sends them back to those gadgets, and they end up developing an emotional dependency to their consistent electronic companions that extends beyond dopamine.

When Josh is utterly focused on the iPad, he keeps constant eye-contact with the display. But without it — or his computer or portable gaming console — he’s a handful. That’s because it’s far easier for him to find solace in screens. They don’t shun him. They give him a place to escape and become a different person.

“They can also create false personas about themselves that are more positive than is realistic and thus make virtual friends online better than in person,” Russell Barkley, a clinical professor of psychiatry and pediatrics at the Medical University of South Carolina, said.

More than anything, Josh would benefit from taking an electronic “time-out.” But ironically, he can’t pull himself away.

Read the full text of the article here ->: http://www.2machines.com/

The study makes sense since a kid being too focused with his or her gadget might be confused between the real world and gadget world.

After 1 week of iPad fasting, we let Baby A play with her iPad for an hour or two on weekends, and only with educational apps fit for her age.

When you’re a working mom, especially like me who’s away from home more than 12 hours a day, you feel guilty for not giving your child a lot of quality time. Para di kami hanapin ni Baby A while we’re at work, we thought of buying her a lot of DVDs to watch.

Similar to gadgets, however, TV and DVDs disengage your child from the realities of life.

3. Invest in books and the right toys

We gave Baby A story books and coloring books. We chose those which catch her attention like animals, musical instruments and Elmo. We also sorted her toys and let her play with the simple ones like buckets, cups and shovels.

In a week’s time…

1. She started talking… a lot.

She keeps asking about the stuff around her. “What’s this, Mommy? What’s this? What’s this?” 3x talaga. Yun lang, matutunan mo ang virtue of patience. 🙂 But seeing your child so excited and so curious is worth it.

2. She started making friends with other kids.

Hindi na siya namimili ng friend, and she doesn’t care if the other kid doesn’t talk to her at first. Kakausapin niya until kausapin siya. And, she knows na how to share!

3.  She started using her imagination

Since she was deprived of digital gadgets, she got to play with real toys and was able to use her imagination.

After watching HI-5 for example, and we turn off the TV, she’ll get her toy buckets and pretend to be Kathleen singing  “Summery Snowman,” and use the same toy bucket as a helmet for her space adventure. Ako yung rocketship niya by the way. 🙂

I’m not saying that gadgets are bad for your kids. All I’m saying is pay attention to your child and see how these gadgets affect them. Gadgets can give you momentary peace but excessive use can harm your kid’s development.–

Seeing Baby A’s changes makes me happy these days. When I get home, Baby A is so excited to see me. She will get her books or toys, pull my hand and take me to her play area. She knows its bonding time na. Then, she’ll start asking me “what’s this, Mommy? What’s this? What’s this?” 🙂 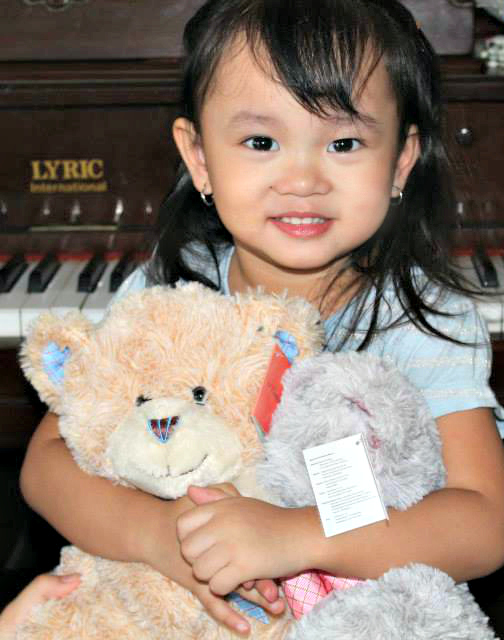