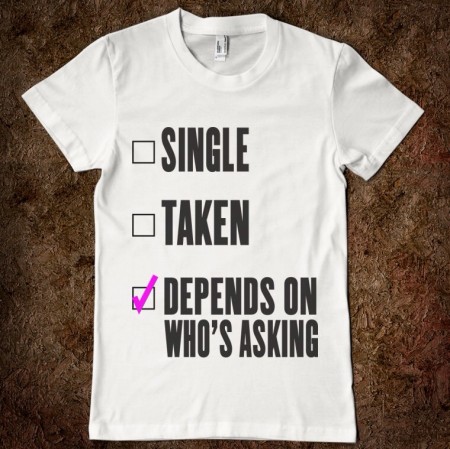 So far though, the development of the relationship arena has left me quite perplexed and even anxious at times. These are the different classifications of relationships as far as I can deduce:

1.     “We have coffee” acquaintance or friend: this is probably the lamest kind for me. Either party obviously is attracted to each other but not so into it that they want to risk actually having an intimate dinner date. “Would you like to have coffee some time?” is probably the lowest ranking version of dating that I can think of…either that or asking a girl/guy out to get a slurpee at the 7-11. I’ve done “coffee” with a couple of guys before. I was lucky enough to have gotten good conversations out of them, but that’s it.

2.     Dating: This actually comes in a whole elaborate spectrum I think. Mostly this is when you go out and have dinner and talk and get to know each other better… with the end goal of finally being in a relationship. You may find yourselves falling for each other during this phase, if you haven’t actually fallen yet.

Then there’s “exclusively dating” — yeah, I know. Anyway, so this basically means you BOTH decide that you’re not going to see other people while you’re dating each other. As opposed to just “dating” where there is no such agreement between the parties. Basta pag “exclusively dating”, wala na kayong ibang ineentertain na i-date, pero it doesn’t necessarily mean that you’re “together”. Take note though that when other people ask you what the status is, you don’t actually say “exclusively dating”, you just say “dating”. You only relay the “exclusivity” of it to your closest friends — with really big mouths.

3.     FB’s: No honey, it doesn’t mean Facebook. This is all the sexual intimacy you need with none of the complications — at least in its truest form. This usually serves as an “in-between” kind of set-up until one of the two find someone they really want to be in a relationship with. It can prove to be extremely fun and worthwhile. If the friend really is a friend, it will not be awkward at all. And it doesn’t all end like in the movies where they eventually end up with each other.

4.     Rebound: Another “in-between”-er. This is that relationship some of us might need right after we end one. It’s comfortable, probably hot & steamy, and clearly not for keeps. For best results, make sure both parties are clear that one is the “Rebound-er” and the other is the “Rebound-ee”. Best to lay down all the cards to ensure minimal emotional trauma.

5.     Complicated: Nakup… yun mga nasa complicated relationships lang ang nakakaintindi ng “complicated” na relationship status. Swear. The complication may arise from a whole range of different things… pwedeng kasi merong third party in the picture, or may isang gusto na mag-commit yun isa ayaw, or averse yun isa sa labels, or it’s an “open” relationship (which really should be a whole different classification but this entry is getting a bit too long na…)

6.     In a Relationship: some may say the pinnacle of the relationship spectrum. It’s not marriage, I have no real experience in that department and best to leave it all up to D to talk about blissful married life – but yes, being in a relationship is just about as good as it gets. This means commitment, faithfulness, love (if you’re lucky) and never having to worry who to spend Friday night with.

Whatever your status is, I hope you’re having oodles of fun. Remember, you have a choice in what relationship you would like to have.