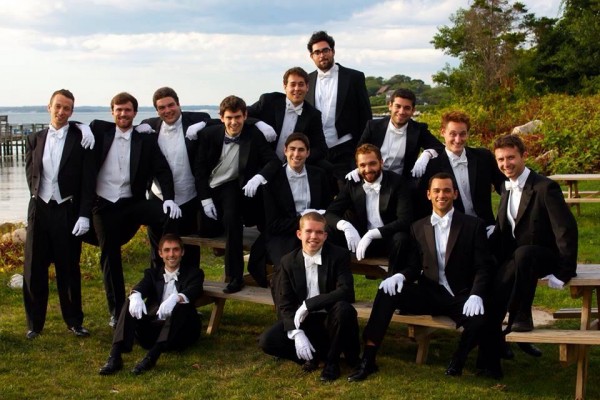 What happens when the premiere all-male choir of the Philippines joins forces with the oldest a capella group of America? You get a musical treat that is sure to reach fever pitch.

Fans of all-male choirs will surely be delighted to know that the men of Koro Ilustrado and The Whiffenpoofs of Yale will come together to stage “Reach”, an all-male a capella concert. The stage of the GSIS Theater in Pasay City is all set for this friendly encounter and once-in-a-lifetime treat on August 9, 2014, 6pm.

The Whiffenpoofs are visiting Manila for the first time as part of their 2014 World Tour. You probably know them better as the all-male choir that appeared on such television shows as The Today Show, Saturday Night Live, Gilmore Girls, The West Wing, and Glee.

Founded in 1909, the “Whiffs” began as a senior quartet and is considered the oldest collegiate a cappella group in the US.

Koro Ilustrado, on the other hand, recently staged “Higher”, a benefit concert for its little brothers from the Bahay-Ampunan ni Hesus, Maria at Jose in Bulacan.

So get ready to experience an overdose of beautiful music performed by gorgeous men with “Reach”, an a cappela concert with The Whiffenpoofs and Koro Ilustrado.

More About The Whiffenpoofs of Yale

The Whiffenpoofs are Yale University’s premier men’s a cappella choir and the oldest collegiate a cappella group in the US.  Founded in 1909, the “Whiffs” began as a senior quartet that met for weekly concerts at Mory’s Temple Bar, the famous Yale tavern. Today, the group is one of the university’s most celebrated traditions. They have performed for generations at a number of venues, including Lincoln Center, the White House, the Salt Lake Tabernacle, Oakland Coliseum, Carnegie Hall and the Rose Bowl. The group has appeared on such television shows as The Today Show,Saturday Night Live, Gilmore Girls, The West Wing, and Glee.   Every year, the Whiffs travel the globe on a world tour performing concerts throughout the US, Europe and Asia and are planning a stop (for the first time) in Manila in August.  The Whiff repertoire features a diverse selection of songs, ranging from traditional Yale songs to original compositions to hits from every decade. You can find more information (including some videos of performances) on the Whiffenpoofs’ website (http://www.whiffenpoofs.com/).

Koro Ilustrado is a Makati City-based all-male choir formed in October 2007 by a group of choral enthusiast.  A member of the Madz Et Al network of choirs organized by the world-famous Philippine Madrigal Singers, it is composed of working professionals with extensive choral singing backgrounds through their college, church and community/parish choir experiences. The group commits to significantly contribute to the nurturance of the country’s choral tradition and envisions to become the Philippine’s premiere all-male choir, exemplifying the best of the Filipino through excellence, discipline and a flair for entertainment.  Inspired by the global spirit and nationalistic dedication of the great Ilustrado men during the Spanish colonial times, it is building a repertoire that includes the best of local and global all-male choir music.  Its choirmasters are Edmund Alan “Jong” Piquero, Jr. and Anna Tabita Abeleda-Piquero, a husband-and-wife tandem, and are both alumni of the Philippine Madrigal Singers.