After Nara, we went to Kyoto. 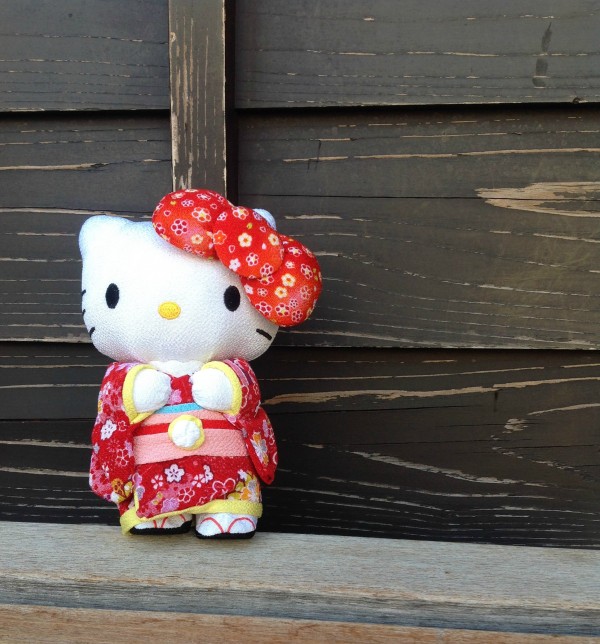 We watched a Kimono Show at the Nishijin Textile Center. 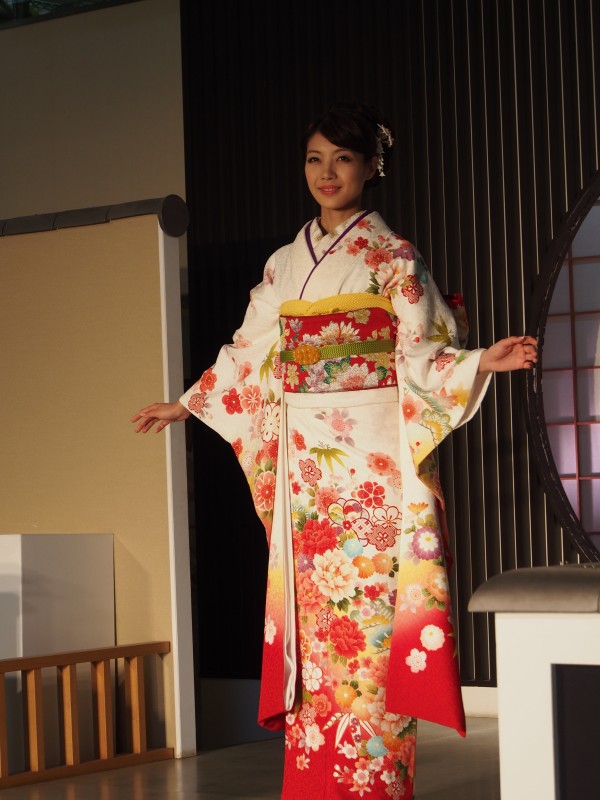 The Nishijin Textile Center, located in Imadegawa, is a modern-style building where demonstrations and exhibits are held on the theme of the traditional Nishijin textile industry. In addition to a kimono show (6 times a day) are hand-weaving demonstrations and a display of historical materials. http://www.pref.kyoto.jp/ 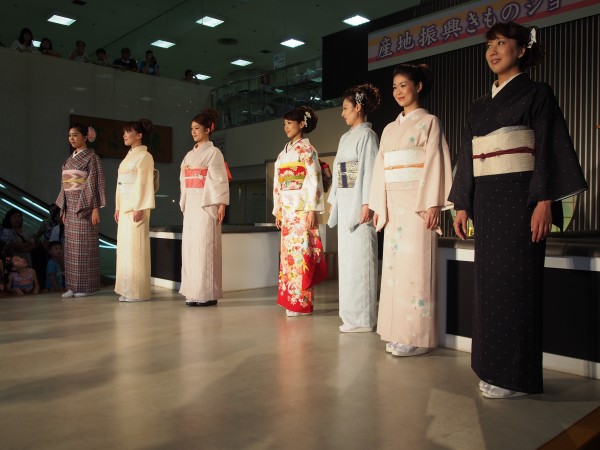 We then went to see the other tourist spots in Kyoto, and here are some of them. 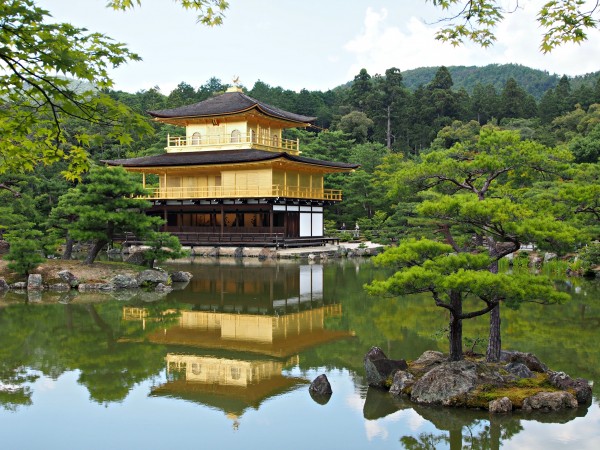 Kinkakuji (金閣寺, Golden Pavilion) is a shariden, a Buddhist hall containing relics of Buddha. The pavilion is part of a temple that is formally named Rokuon-ji Temple, but commonly called Kinkaku-ji Temple, or Temple of the Golden Pavilion. Rokuon-ji is a Zen Buddhist temple in the Shokokuji School of the Rinzai Sect.

This area was originally the site of a villa called Kitayama-dai and owned by a statesman, Saionji Kintsune. Ashikaga Yoshimitsu, the third shogun of the Murmachi period, took a liking to the area and acquired it from Saionji family in 1937. He then built his own villa, which he named Kitayama-den.

The garden and buildings, centered on the Golden Pavilion, were said to represent the Pure Land of Buddha in this world. The villa also functioned as an official guesthouse, welcoming Emperor Gokomatsu (Father of Zen teacher, Ikkyu) and other members of the nobility. – (sabi ng leaflet na pinamigay sa Golden Pavilion ;-P) 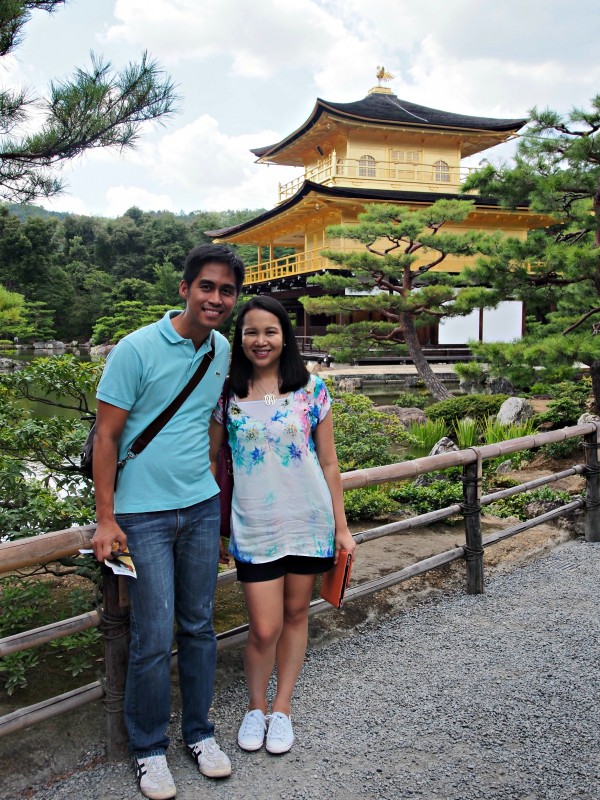 Next stop is the Pure Water Temple. 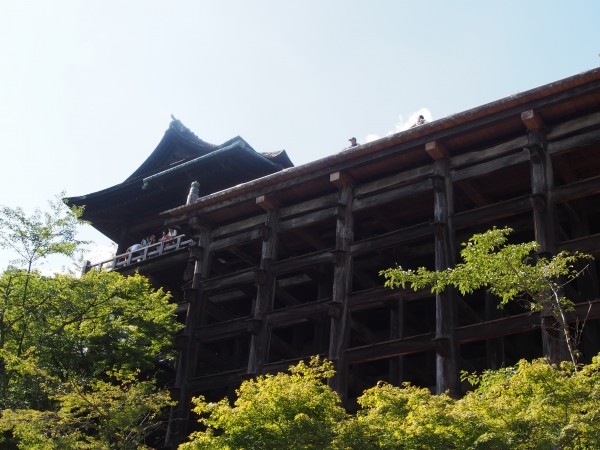 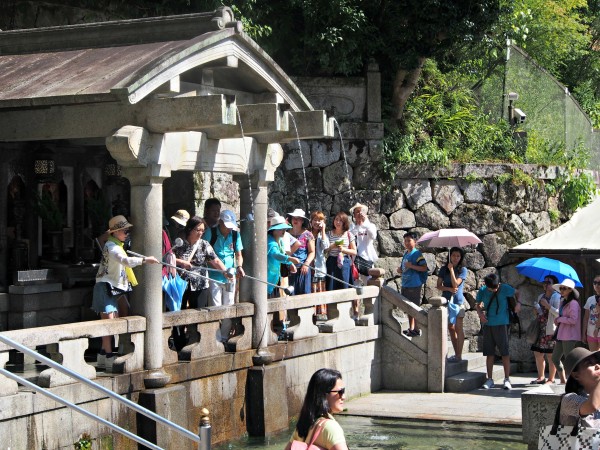 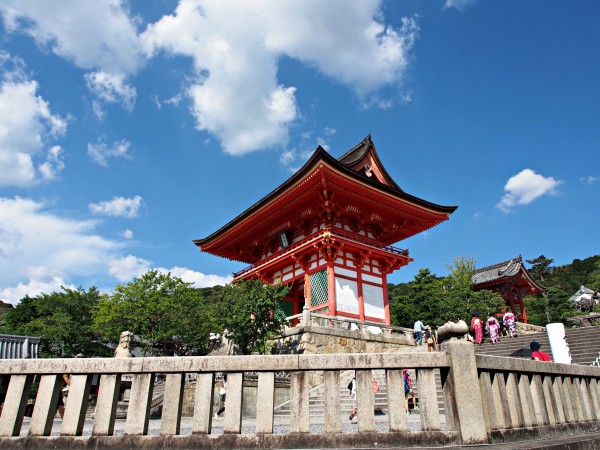 Kiyomizudera (清水寺, literally “Pure Water Temple”) is one of the most celebrated temples of Japan. It was founded in 780 on the site of the Otowa Waterfall in the wooded hills east of Kyoto, and derives its name from the fall’s pure waters. The temple was originally associated with the Hosso sect, one of the oldest schools within Japanese Buddhism, but formed its own Kita Hosso sect in 1965. In 1994, the temple was added to the list of UNESCO world heritage sites. – http://www.japan-guide.com/ 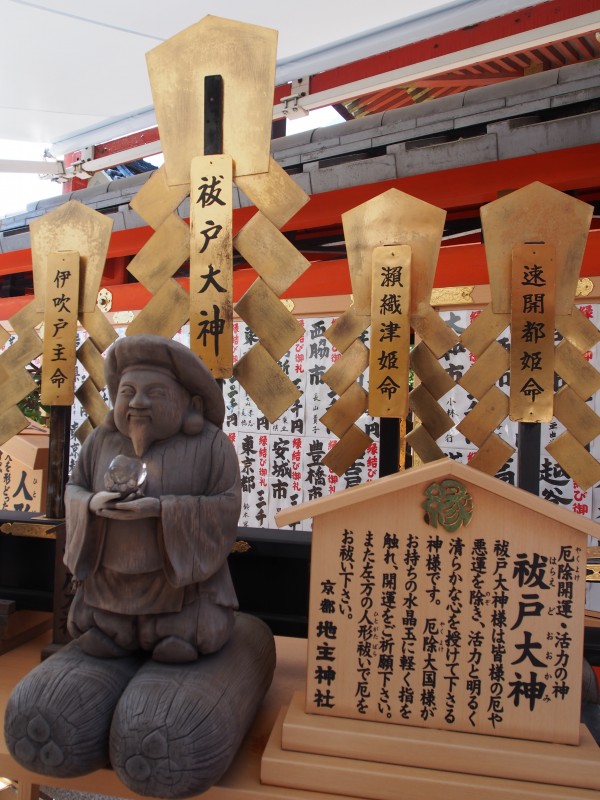 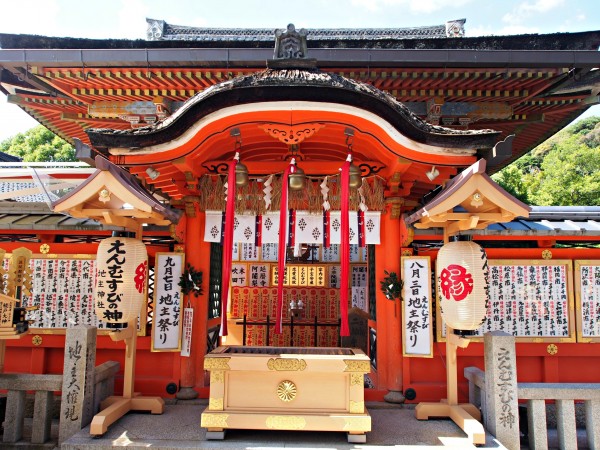 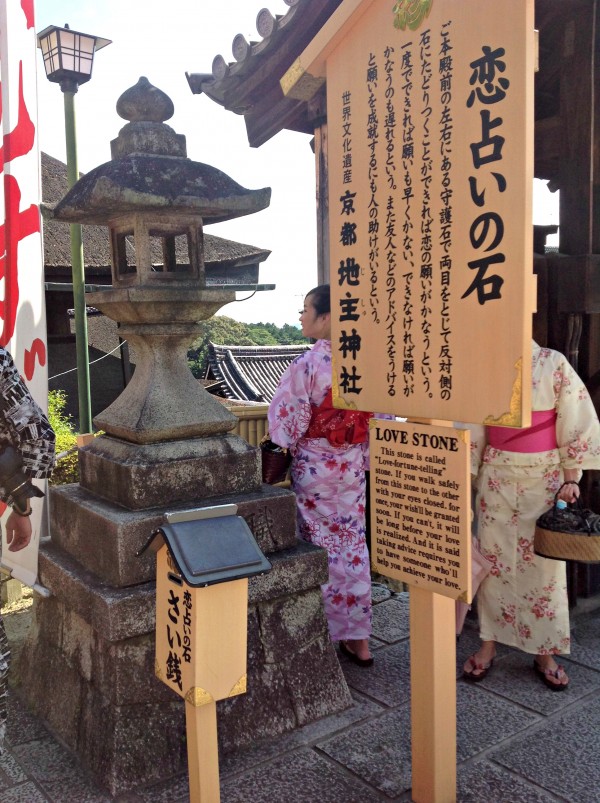 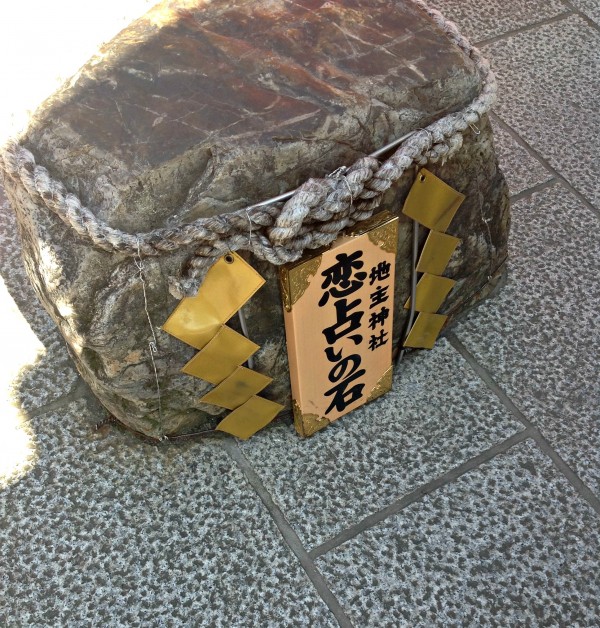 Jishu Shrine possesses a pair of “love stones” placed 6 meters/20 feet apart, which lonely visitors can try to walk between with their eyes closed. Success in reaching the other stone with their eyes closed implies that the pilgrim will find love, or true love. One can be assisted in the crossing, but this is taken to mean that a go-between will be needed. The person’s romantic interest can assist them as well. – http://www.japan-guide.com/

We then headed to Yasaka Shrine. 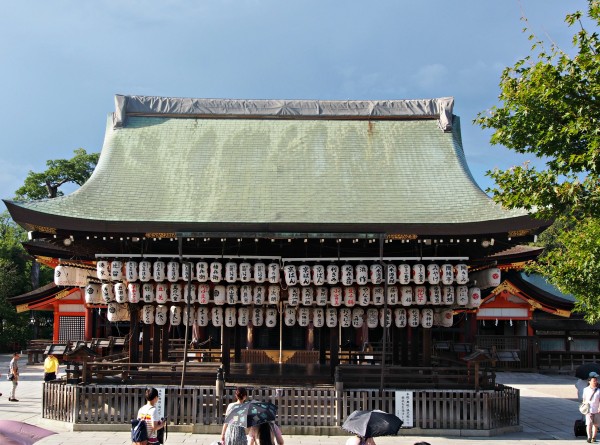 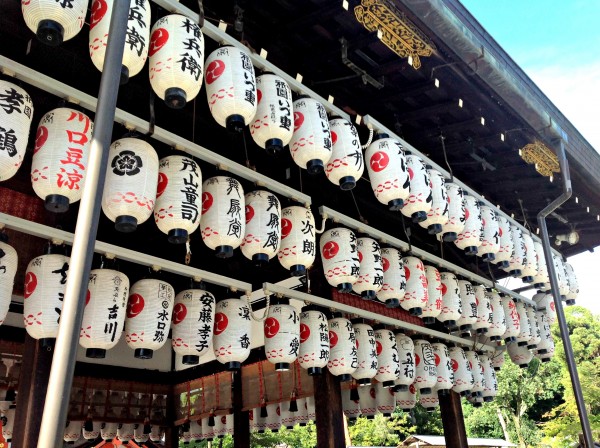 Yasaka Shrine (八坂神社, Yasaka Jinja), also known as Gion Shrine, is one of the most famous shrines in Kyoto. Founded over 1350 years ago, the shrine is located between the popular Gion District and Higashiyama District, and is often visited by tourists walking between the two districts. Yasaka Shrine is well known for its summer festival, the Gion Matsuri, which is celebrated every July. Arguably the most famous festival in the whole country, the Gion Matsuri dates back over a thousand years and involves a procession with massive floats and hundreds of participants. The shrine also becomes busy during the cherry blossom season around early April, as the adjacent Maruyama Park is one of the most famous cherry blossom spots in Kyoto. – http://www.japan-guide.com/

By this time, pagoda wave lotion na kami. We were really tired from all the walking. Our tour guide’s name is Nishida. And we jokingly called the tour, Nishida March (parang Death March lang). Ang jinet kasi!! Sabi niya probably we don’t exercise much and that’s why were tired. Eh parang inikot na namin ang buong Kyoto. Anyway, we enjoyed naman the temples so it was still worth it. Yung iba nga nag-tour ng nakaganito. 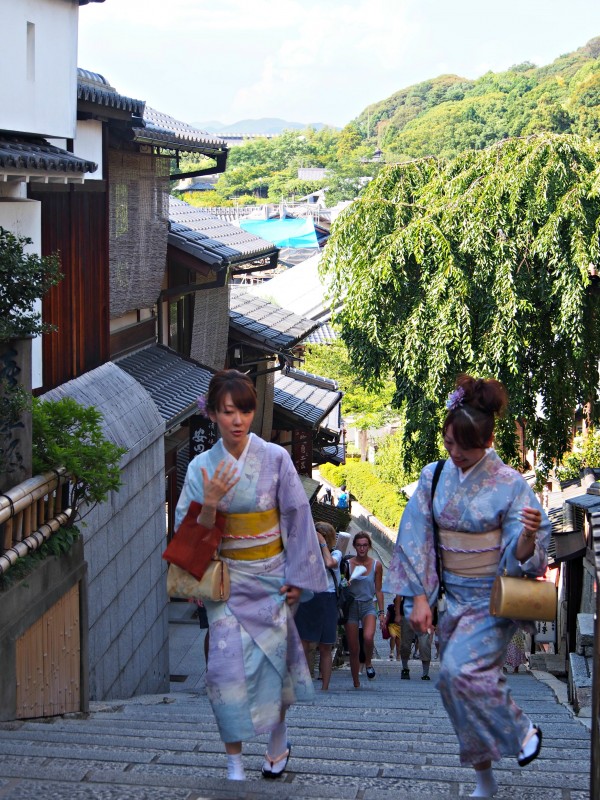 P.S. Dahil fans kami ng Memoirs of a Geisha, we passed by Gion. Gion is said to be the largest and most exclusive geisha district in Japan. The Ochaya (teahouses) in Gion are the most exclusive “happening place” of connected, wealthy individuals in Japan. Pero dahil hindi kami connected and wealthy individuals, hindi namin nakita ang loob ng Ochaya, and wala din kaming nakitang geisha 🙁 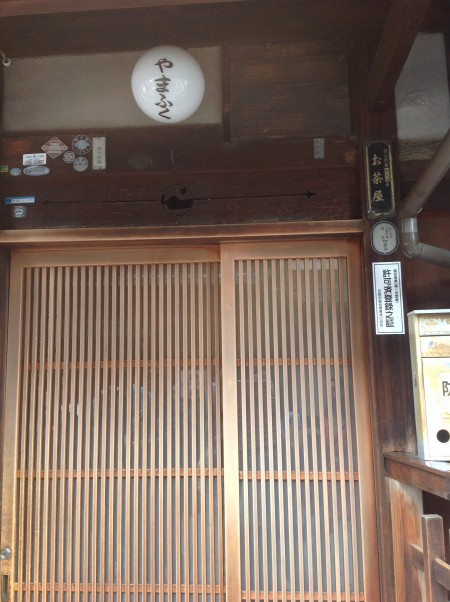