For a well-deserved holiday vacay, I would highly recommend going to El Nido, Palawan — and doing it on a budget. Voted as the best island to visit in the world for 2014, Palawan has many things to offer, but El Nido is still on the top of that list. This little town in Northern Palawan has so much to offer and is the jump off point to visiting some of the most beautiful  beaches you could ever lay eyes on. You may have heard of celebrities such as Angelina Jolie, Maria Sharapova, etc. visiting El Nido and think it’s only for the rich and famous, but nothing could be farther from the truth.

And here is how you do El Nido, without breaking the bank (based on my latest adventure):

Take a flight to Puerto Princesa and not a direct flight to El Nido. I got an AirAsia Zest flight from Manila to PP, which cost about P10k, including all insurance and airport fees, etc. I could have gotten it MUCH cheaper if I had booked earlier and taken advantage of those promo Direct flights are much costlier. Also, it’s international tourist season in Palawan during December so that increased the price.

CJ and I went to have a light dinner and drinks at Kinabuch’s. We had a couple of beers each, CJ had  double shot Absolute vodka, 2 pulutan and 1 ulam…cost us under P700. 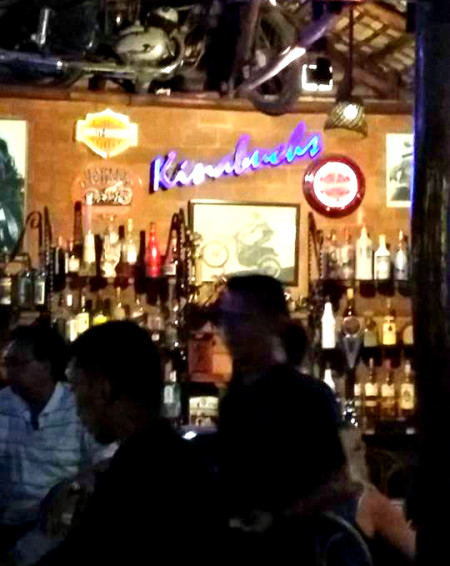 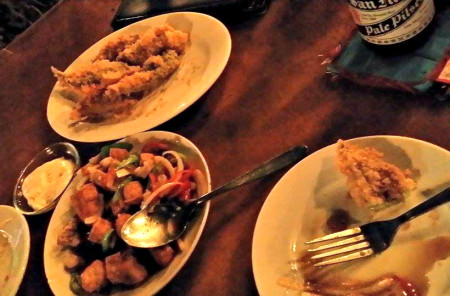 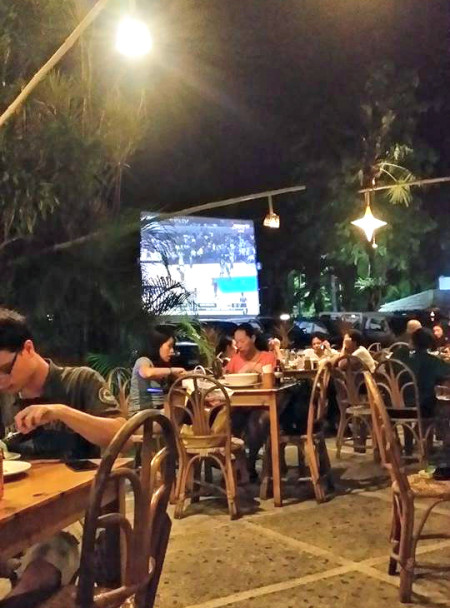 Then we went to have more drinks at Ugong Rock, where they had a cozier ambiance and live music. There we had a couple of double vodkas again, each…did not spend P500. 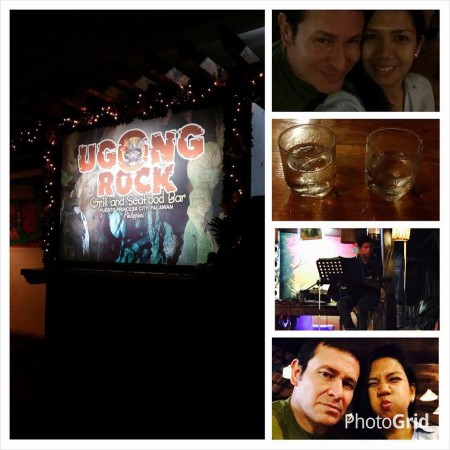 At PP we spent the night at Lotus Garden. It was cheap at P1500/night. But I do not recommend you stay there. It looked cute on the outside but the room we got was just s***. It was right next to the kitchen so our room smelled like food and ulam and oil. The banyo did not have a shower. It had a tub with rusting faucet and hose. I was afraid to touch anything in it. The AC remote did not work. There was a big yellow stain on the bed sheet when we came in.  Do not book here, EVER. There are a lot of other places to stay at within the same price range. I just was not able to get those because PP was already almost fully booked by the time I decided to do the trip. 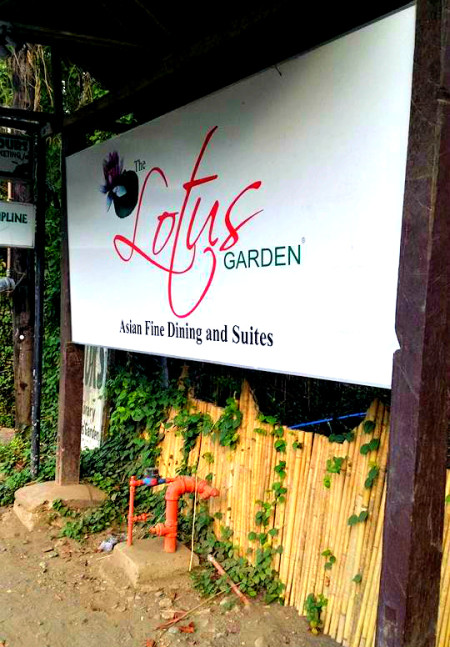 There are several places to stay at in PP, all walking distance from the airport. CJ and I just walked with our backpacks from the plane to our lodging for the night.

We took a van courtesy of Fortwally Service from Puerto to El Nido. P600 per person. The trip takes about 5-6 hours road trip including a couple of stops.It was pretty cramped in the van, but we survived.

We arrived at El Nido terminal around 2pm, then took a P50 tricycle ride to our hotel, Garnet Hotel along Hama Street. It was such a relief to see that our place, though modest, was clean, comfortable, with a nice banyo and an excellent view of Bacuit Bay. We got a room at the rooftop floor. It was fantastic! And it was right in the middle of everything. For P2,700 a night, I was over joyed!

Because everything was walking distance we did not really spend anything for transportation. We did eat though… a lot.

1st dinner in El Nido was at OG’s Restaurant which was right by the water, and a 2 minute walk from Garnet Hotel. We had garlic crabs, shrimps and grilled fish…all for under P1000..including drinks.  We had a couple of more drinks right next door at Sea Slugs, where I also met with the friendly staff of Servant Tours — our chosen tour service for island hopping. Jennifer kindly went over to meet us that evening to collect our down payment so that they can use it to buy our lunch for the following day.

We were lucky that the weather was cooperating on tour day. CJ and I decided we wanted to have a private tour, just the 2 of us. So we rented a banca which was good for about 6 people, for P5,000 for the whole day (excluding the P200/person environmental fee). It would have cost us P1,400 each in a group otherwise. We just wanted to see beaches so we took Tour Package C — which includes seeing where the Bourne Legacy ending scene was filmed. Lunch was prepared by our boatmen, John and Marshall…(yes, those were their names…I know, right?!!). We had grilled everything — mackarel, porkchops, mussels, talong, pineapple (my idea). And we also had fresh fruits. They brought a good supply of mineral water for the trip and lots of ice for our beers (special request and at additional cost — 6 cans of pale pilsen for under P300) 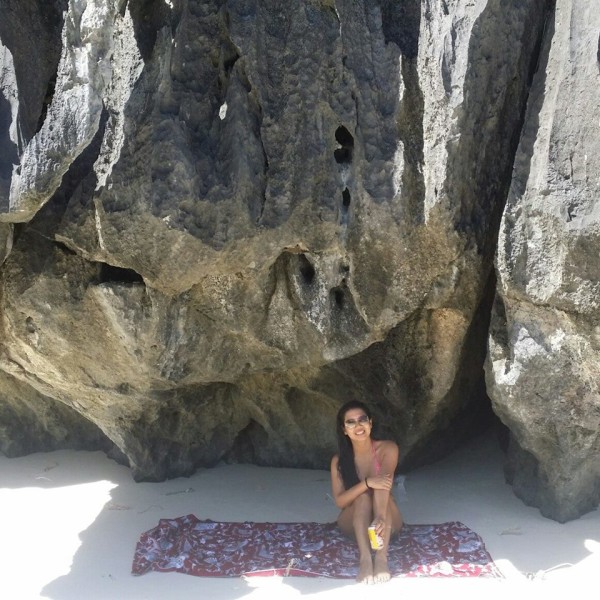 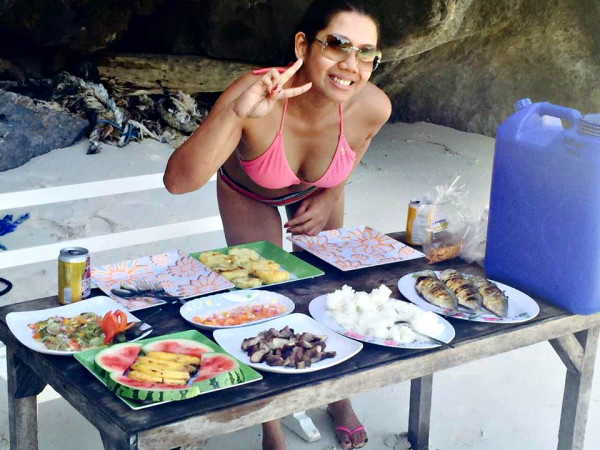 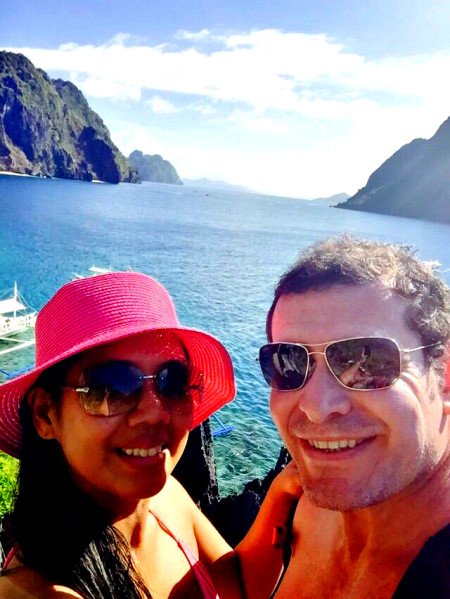 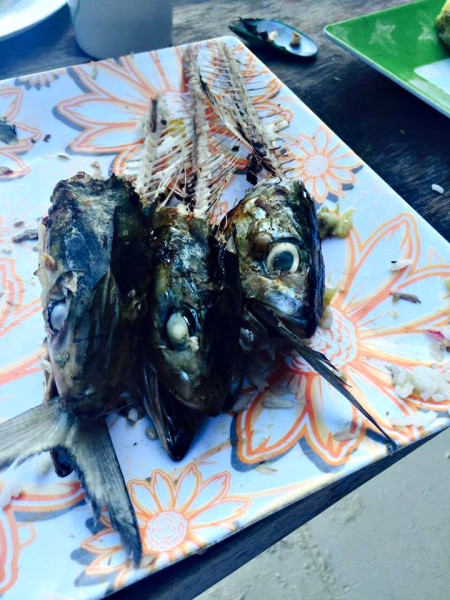 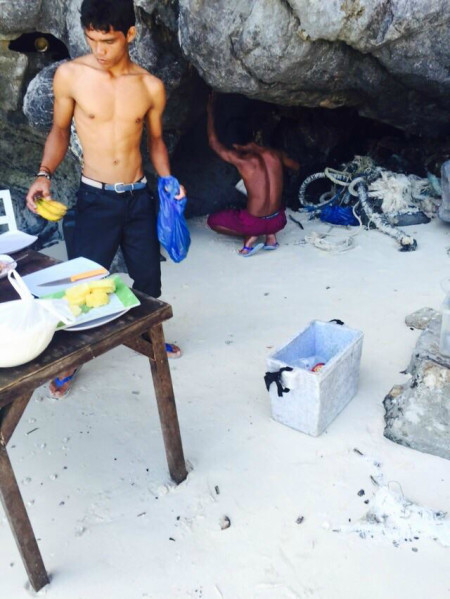 I insisted on having brekky at this bagel place called V and V Bagels. I read about it on Trip Advisor. And we were not disappointed. 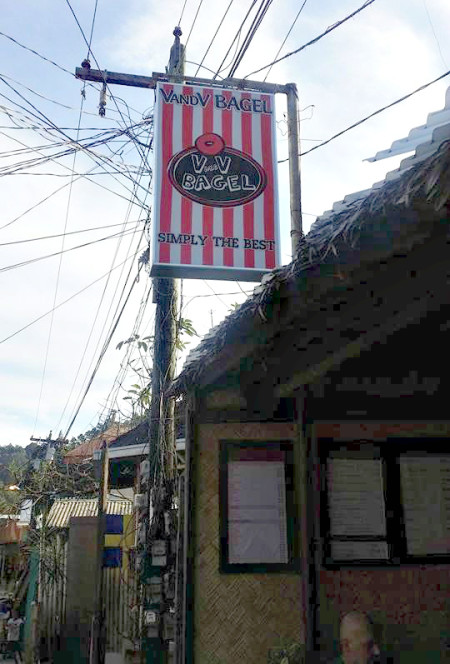 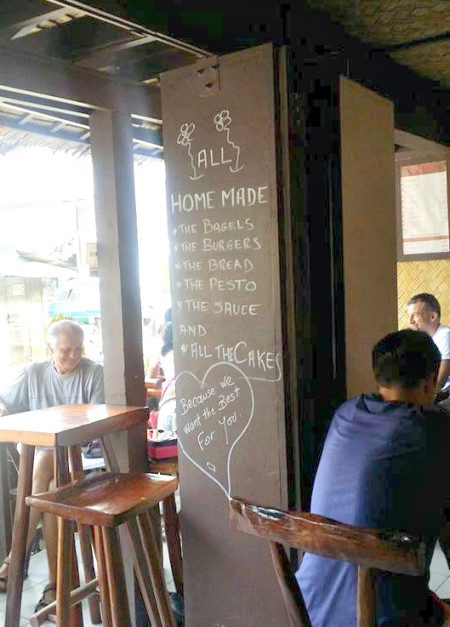 CJ used to ride motorcycles and race. He hasn’t been on a bike in years. So I thought it would be a special treat for him to drive around El Nido and see the landscape from a different perspective. We rented a 135 cc dirt bike from this American guy with a tiny booth along our street. 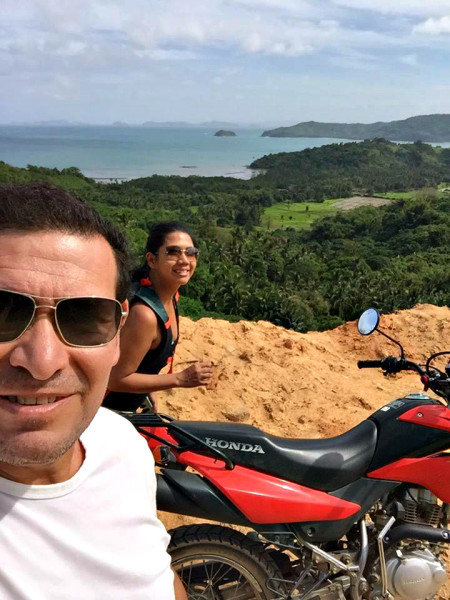 We toured around the whole of El Nido and saw spectacular views. CJ was a great driver and I had a blast on the turns and the jumps (don’t tell my mom)… We also found our way to the zipline and we both tried it for the first time. The guy helping us out and tethering us explained that there would be guys waiting to catch us at the other end, but if we fall on the way, he did assure there would be someone to collect what was left of us down at the beach. Lovely. 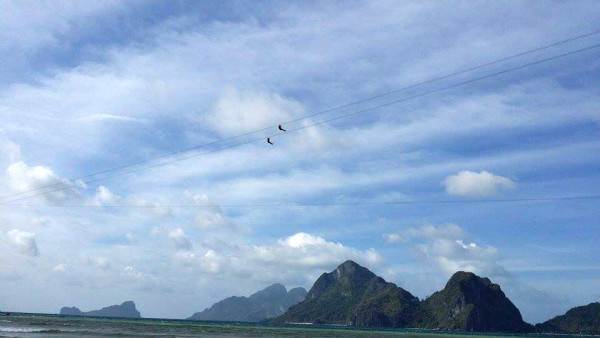 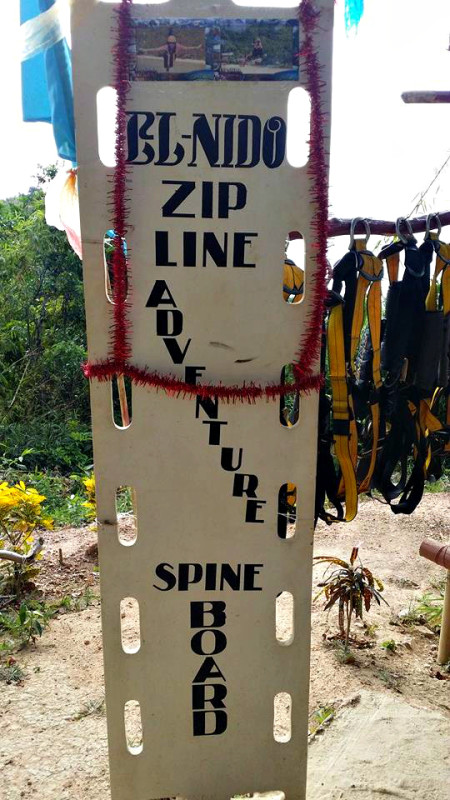 Lunch was at Waterhole, where I had a big hunk of steak and CJ had a sausage. It was not anything spectacular, but it was meat and it filled our bellies.

We had probably, arguably the best pizza in the Philippines at Altrov’é. There was a long line to get in, but I would say it was well worth it. And to bide the time, we got our own party started at the line with a bit of Tanduay, some Coke and ice (all under P100 including the plastic cups). 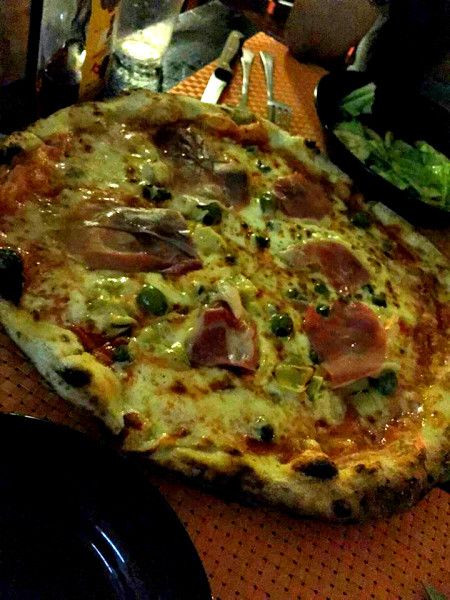 That pizza was phenomenal… maybe because we had lowered our expectations, having seen where and how they made the pizza. We ordered a Mediterreano, with prociutto, capers and olives, along with a salad and carpaccio. The pizza was the right amount of soft, perfectly seasoned, right amount of cheese and freshly made. Molto bene!!!! Who would have expected that in that little town by the sea… That meal cost us a little over P1000.

All in all, we spent 4 days in El Nido. We had P20k in cash and still had enough left by the end of the trip to buy pasalubong.

Palawan is still THE destination to be at. To all of you who  are planning to take the trip, please always be mindful of your trash and the environmental impact of your tour. Pick up trash on the beach when you can, and make sure you throw yours in the proper disposal bins. It’s more fun in the Philippines baby! And let’s help keep it that way.