The first time I tried squid ink pasta was at H’s place. It was fantastico! That was a few years ago.

Last Sunday, I had an itch to cook for CJ, and I thought I could do a pasta dish. Since he’s made me so many great meals at home, I thought I’d try to make an awesome one for him. I remembered H’s squid ink pasta. And so I rolled up my sleeves and tried to reverse engineer what I could remember.

I could not find ready made squid ink pasta in our tiny local grocery. I expect that I have to go to some of those fancy gourmet shops in Makati before I find one. 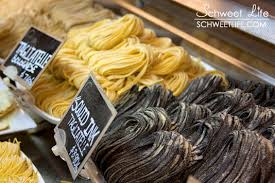 I was in no mood to make my own pasta, especially because I do not have a rolling pin nor a pasta maker thingy. 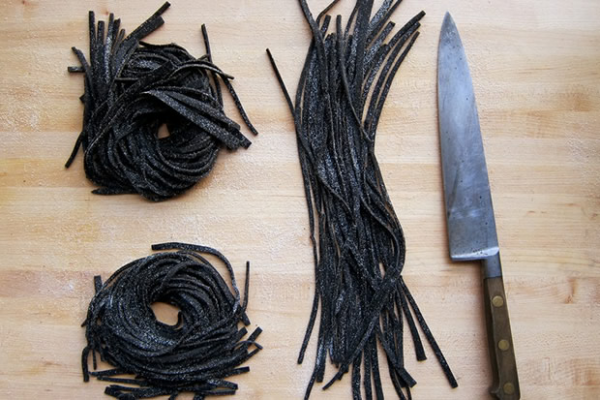 My solution: get some angel hair pasta and some fresh squid. Yep, I’m a cheater.

The meat for this pasta dish had to be chorizo. I wanted to get chorizo ready made from the store, but no no no… CJ would not hear of it. He wanted to make our own chorizo. He’s done it before and insists it’s the “right way”. So fine, at least I’m straight up when it comes to the chorizo.

So here are the ingredients to my pasta chamba:

about ¼ kg home made chorizo

Now, the fun part is taking out the ink sacks from the squid. You gotta be really careful. Kung marunong ka na maglinis ng squid, alam mo na gagawin mo. Kung hindi pa… haaaay…baka manibago ka day. First take out the plastic thing that kinda forms the spine of the squid. Just slide it out of the body. Then slowly pull out the head, by sticking your finger inside the body of the squid, while detaching the little parts of the insides and pulling on the head and tentacles… If you did it right, malalabas lahat yung ulo kakabit yun mga laman laman nun squid, including the ink sack. Put the body aside in the fridge (gamitin pang calamares the next day), and work on getting the ink sack – btw, eto yun parang silvery little thing. Just carefully pinch the top of the sack and pull down. Set ink sack aside in a little bowl. Repeat 7 more times.

Cook your angel hair pasta in a pot. About ¼ kg should be good. Don’t forget to put olive oil and salt in the water. Ingat lang dahil manipis. Madali mabali. And mabilis lang yan maluto.

Sauté ½  of the garlic and ½ of the onions in 2 tbsp of EVOO, then dump the ink sack. Don’t worry if basag na yun iba and the ink is all swirling around in the bowl. Your angel hair pasta should be cooked by now. Take the pasta and put it in the pan with the cooking ink. Toss it around a bit. Set the now very black “squid ink” pasta aside.

Saute the rest of the garlic and onions in the butter using the same pan. Pag medyo translucent na yun onions, dump your chorizo. Fry it! Hanggang sa brown na sya and cooked. Lalabas yun mga juice from the meat. Pag lutong luto na yun meat, put in the pasta and cook it with the meat and juices remaining in the pan. When your pasta is sufficiently coated with the oils and the meat, you’re ready to plate!

Get the tongs, get a dollop full of pasta, put in a bowl, drizzle with the lemon juice, dust with some parmesan, and garnish with some freshly chopped parsley. Mukhang gourmet! 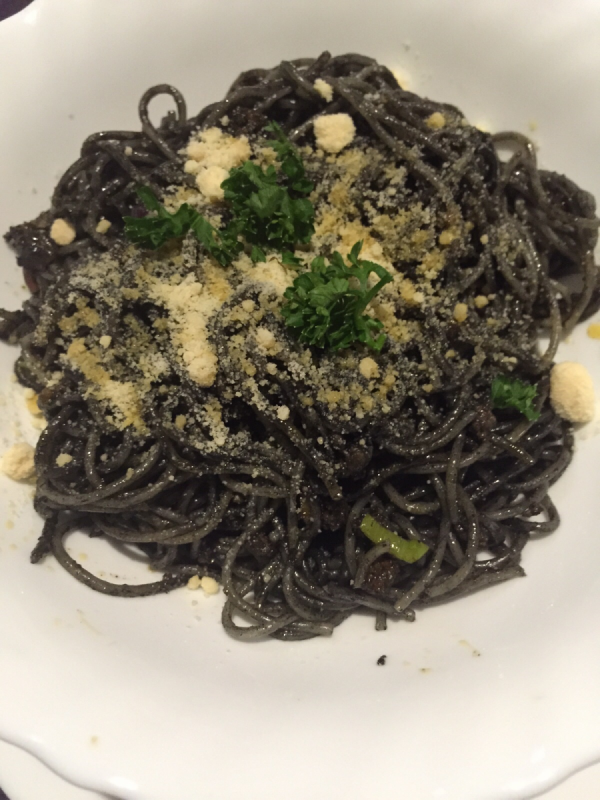