One of the most fun things I had the pleasure of doing for Sonny Angara’s senatorial bid is helping with the Musikaravan. This was organized by a bunch of young, over-zealous voters who truly believe that putting Sonny Angara in the Senate means a brighter and better future for education and job opportunities. 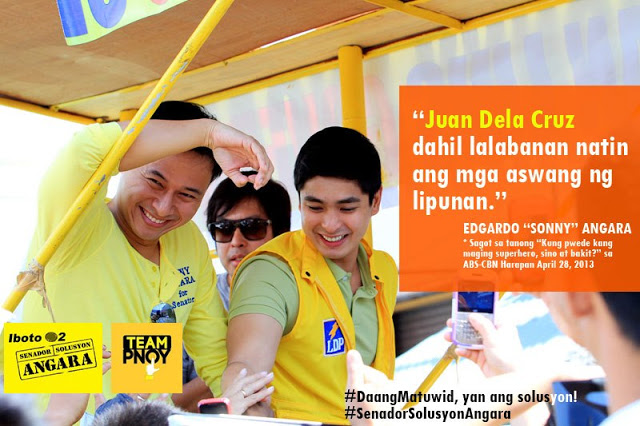 Plug na kung plug, pero enjoy talaga yun Musikaravan. The caravan was just a couple of buses, ridden in by youth volunteers and musicians. The youth took to calling themselves the Angara ng Kabataang Pinoy or AKP. The professional musicians who joined were Jason Sta. Maria (@JasonStaMaria on Twitter), Mike Chan (@MikeChanMusic on Twitter) and Climax (@musiclamax on Twitter).

15 Cities, 8 provinces in FIVE days. Including a day with Sonny and Coco Martin in Pangasinan. (And no, hindi na naman ako nakapagpa-picture)

Climax was so impressed with Sonny, that he and his band composed a song, that is now becoming our unofficial campaign theme song. It’s called “pANGARAp”. It’s pretty catchy. Check out the youtube video:

And remember, for this coming May 13, head on to the polling precincts and VOTE WISELY.