Sometimes may mga random moments lang that a person experiences in life; moments which leave a person asking “Did that just really happen?,” or “Did I just do that?” More often than not, ang mga bagay na ganito ay nangyayari sa mga taong may “Go-lang” attitude in life.

“Sir, I have one question for you, but you have to answer it in five seconds!”

“Do you want to go with us and party tomorrow night?!”

“Congratulations, sir! Because we in (company) believe that those who say yes in life and not maybe, should be rewarded, we are giving you two SVIP tickets to the much-awaited-“ 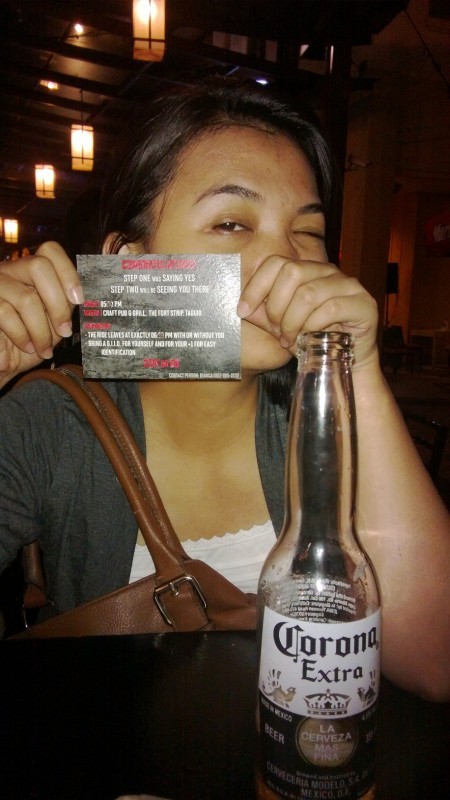 Our ticket to the free tickets!

Luckily, I have been blessed with awesome and understanding and beautiful bosses who allowed me to go on this last minute and unplanned concert. To think a few days before that tinatawag pa nila akong Riri after I had a haircut.

Pagdating namin sa Craft ng friend ko, aba, akala ko meeting place lang. But no, they treated us to good food. And for two people lang, parang masyadong marami! They fed us puttanesca, mozzarella sticks, and an entire pizza. Dalawa lang kami. And of course a few drinks every now and then. May iba pang lucky “Yes-people” pero we were all seated separately. 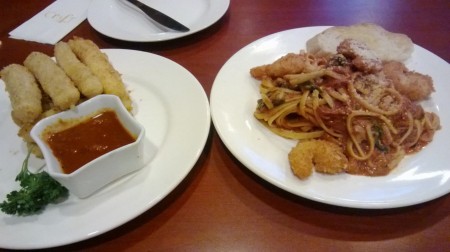 The mozzarella sticks were really good! 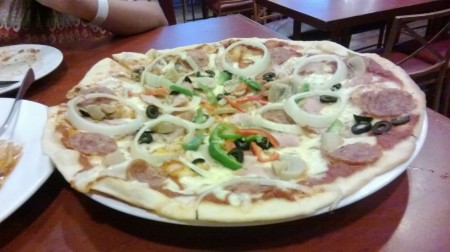 But no. This is the ride. 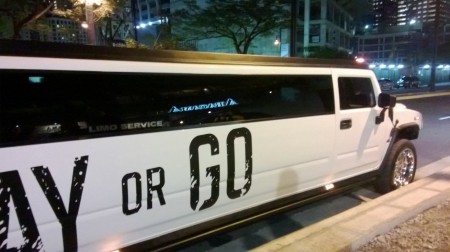 Inside, they gave us the tickets. Mura lang pala yung ticket. Ayan oh: 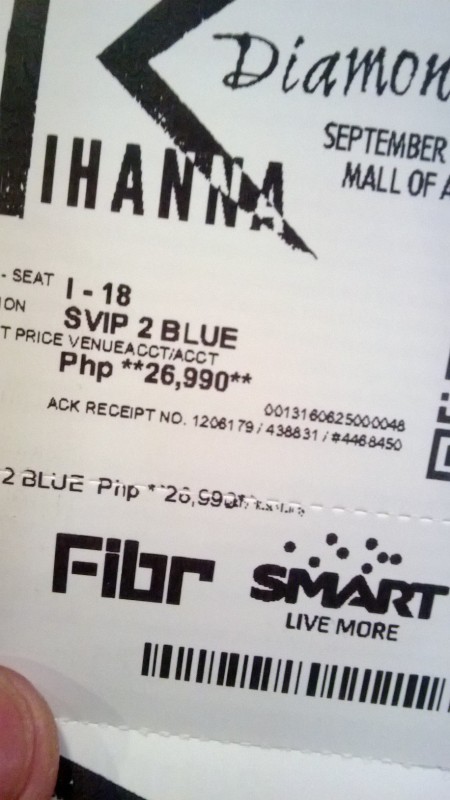 So inside ayan, drinks ulit, chit chat and what not. 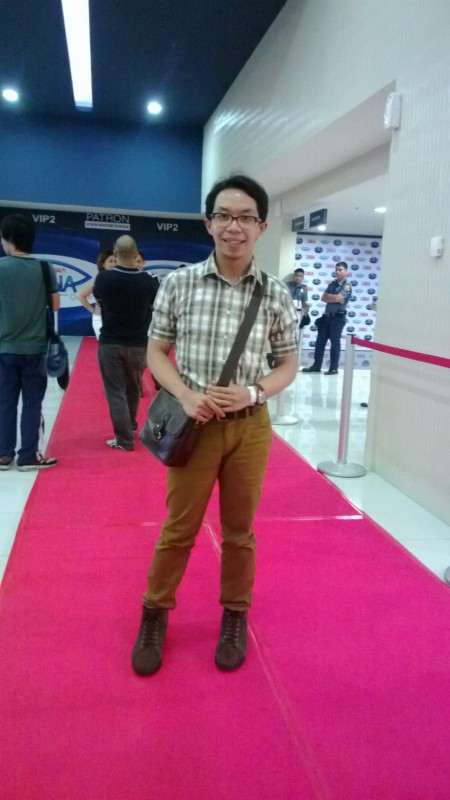 On the red carpet

We finally decided to enter the concert venue under the impression na baka ma-late kami sa pagnood kay Rihanna. We were met with the front act, wearegta, a couple of DJs from a country na hindi ko alam kung alin. 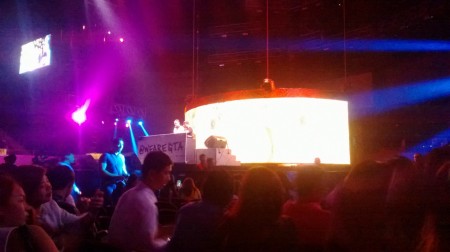 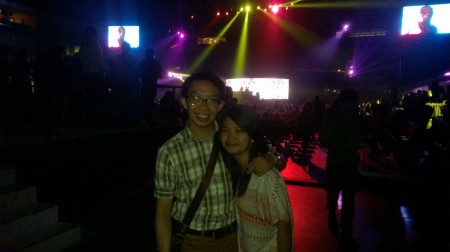 Z, my company on Wednesday night/plus 1 for the concert 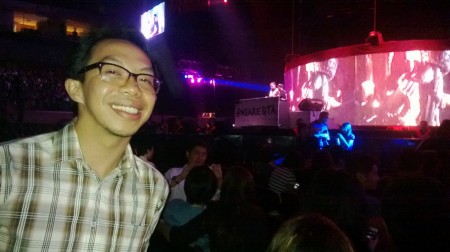 The set was quite simple. Of course, the places was loaded with EDM lights and screens were also mounted on the stage and at the side. Hindi talaga siya big production unlike Kylie Minogue or Katy Perry concerts, so I was kind of expecting Rihanna to bring it in her performance. 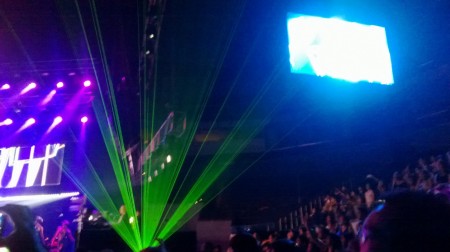 Anyway, at some point, lumabas rin si Rihanna! Of course, in as much as free lang tickets, I actually love her music. So yes, tayo agad, sayaw, kanta, talon! 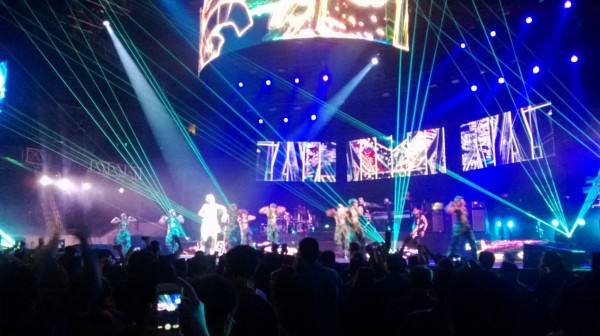 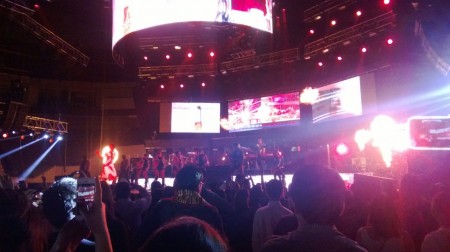 Still Riri! She seemed bigger in my position.

(Note that I did not have to zoom this shot in)

Apart from singing her songs from her latest album Unapologetic, the crowd was also given a treat to her more classic (and sing-able) hits such as Umbrella, Take a Bow, Please Rude Boy, Hate that I Love You, and my personal medyo-reggae favourite, Man Down. I was super happy when she sang her very obscure ballad na parang wala masyado may alam (but it’s one of my favourite songs), Cold Case Love.

While I was medyo crazy na the entire night, nothing got me more than when she sang We Found Love. At some point I probably jumped too much I hit the person next to me, pero medyo wala na rin akong pakialam. That’s when I knew na the concert had reached its party level.

When she finally performed Diamonds, parang bittersweet kase inasmuch as we all wanted to hear that song, we knew na matatapos na rin ang party/concert.

Overall, I really had a great evening enjoying the concert. Rihanna did her job well. I mean sure medyo matagal siya nag-start, but then again we had free tickets so keri lang.

Apart from Rihanna’s possession of talent, another realization that evening was that, while we are getting old, I don’t think it should be an excuse not to be adventurous once in a while. Not to say na dapat magpakatamad sa work, mag-bum na lang forever, at magpaka-carefree sa life without regard for the consequences. I’m sure there’s a way of keeping balance. Just enjoy once in a while. Go out on an unplanned evening. Travel spontaneously. Say yes to a random question.

It won’t hurt to keep it light and fun sometimes. Who knows what adventure may just come your way? 🙂

(Apologies for the photos, I was just using my phone’s camera the whole time. The resolution is pretty good, right?)