(Apologies for the very long interval. For Part I, read here.)

On 2 December 2013, I bid goodbye to Angelica, who was headed to Nepal, then embarked on my trip going to Phuket. For starters, I was semi-freaked out by the personal driver who drove me from Melaka to the airport in KL. He was a big Chinese guy who had very low voice when he spoke Mandarin. This guy, who could easily break my arm like a twig, drove me for two hours, through the mountainous regions outside of the proper highway.

Despite my paranoia though, he brought me to the airport, so that wasn’t so bad after all. 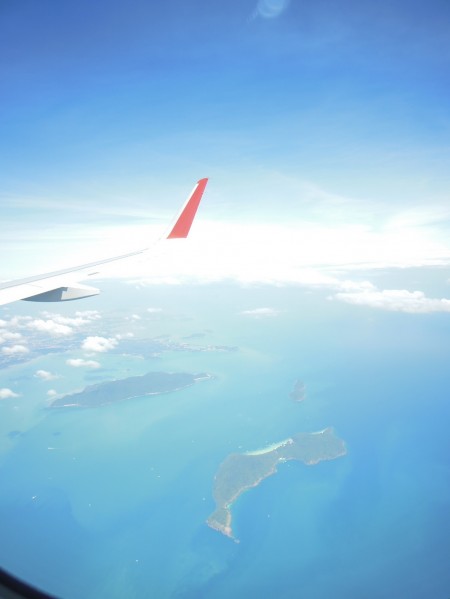 Aerial view of the islands off Phuket

By mid-afternoon of that day, the plane was ready to land in Phuket. I could now see the coast of Phuket and the little islands off its coast. From my seat, it was visibly sunny with a few harmless clouds hovering over Phuket and its coast. The weather could not have been more perfect. Thus, imagine my frustration when, upon arrival at the airport and upon being transported to the hostel, an overcast began to form.

Anyway, upon arriving at the hostel, I met Glenn, from Belgium. He’s a cool kid (he’s 21), though maybe not at first impressions, since our initial discussion was on where he could have possibly put his glasses or how they may have been stolen from him. Plus, the fact that he hated having to put his contacts on was not helping things better. Because of the overcast and his eyesight, we decided to skip the beach until the next day and just walk around the city for food and drinks. Apparently, they don’t have flies in Belgium, so we (I mean he) had a hard time looking for a place that was acceptable to eat in. It was quite funny, when I would think that a specific outdoor restaurant was okay, my third world senses would guide me to him, squirming with discomfort in a corner at the thought of sharing his table with flies.

And so, in a coastal city where wonderful seafood is abundant and tasty barbecue and roasts were everywhere, we ate kebab in a Persian restaurant. 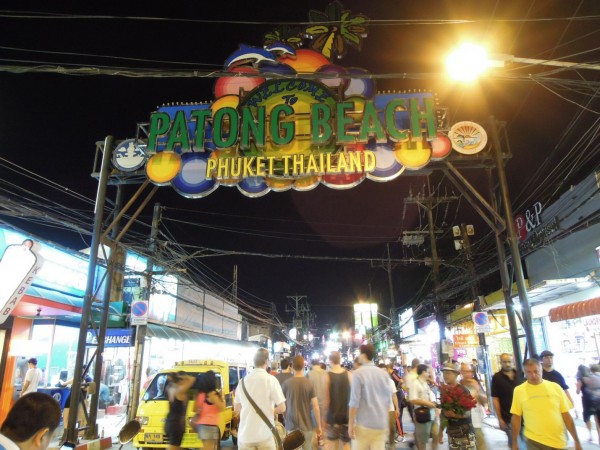 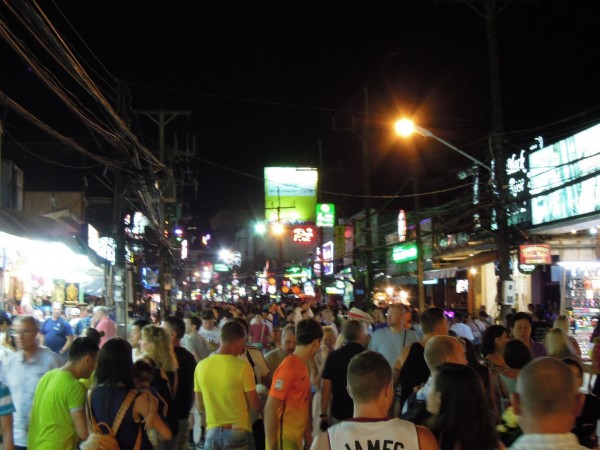 After a very clean dinner and a few drinks with Glenn, I decided to explore the other parts of the city during that evening, particularly the clubbing scene. Along Patong Beach, Bangla Road was obviously the place to go to for most people. I decided to go elsewhere, at around 10 PM. 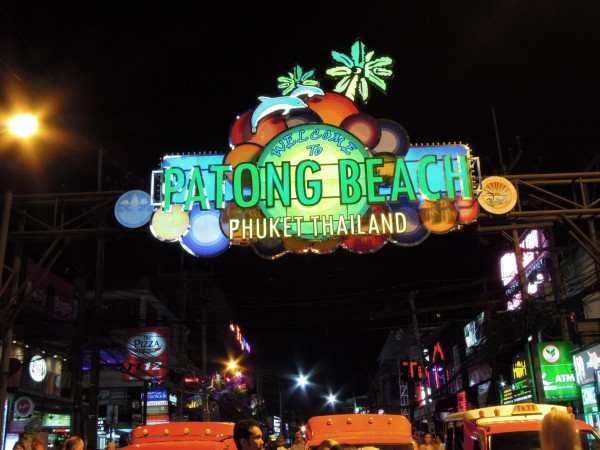 (Due to the nature of the content of this portion, the same has been deleted. To satisfy your curiosity, please contact the author directly. Enjoy the pictures, though.) 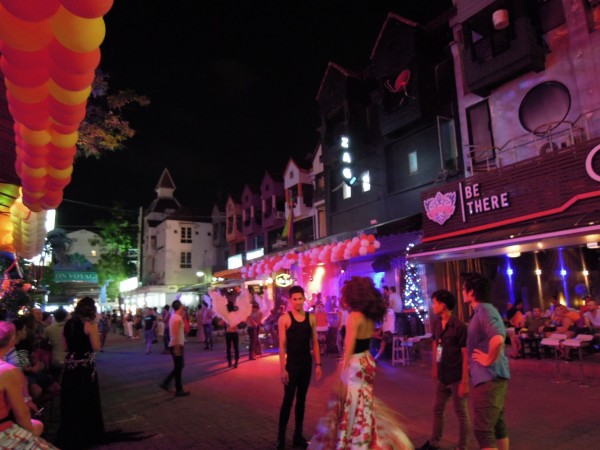 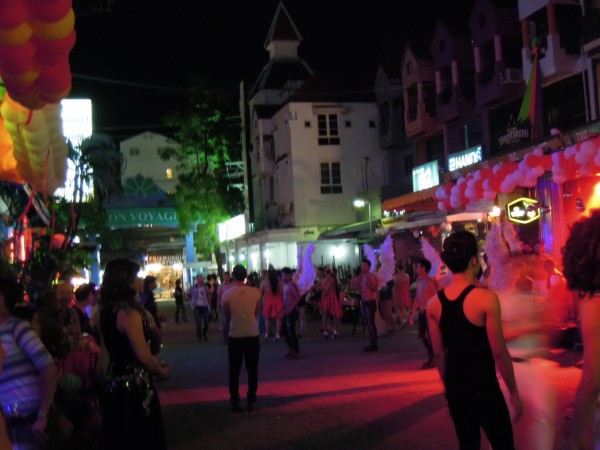 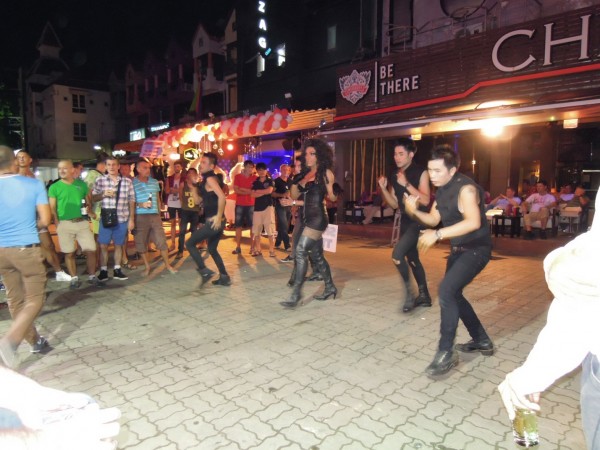 I finally got home at 4 AM, wondering how in the world I would wake up at 7 AM for the islands tour which I booked earlier.

Despite myself I managed to wake up in time. It helped that I slept in the clothes that I would be wearing for the next day, a habit that proved to be very useful for many other moments during my trip. 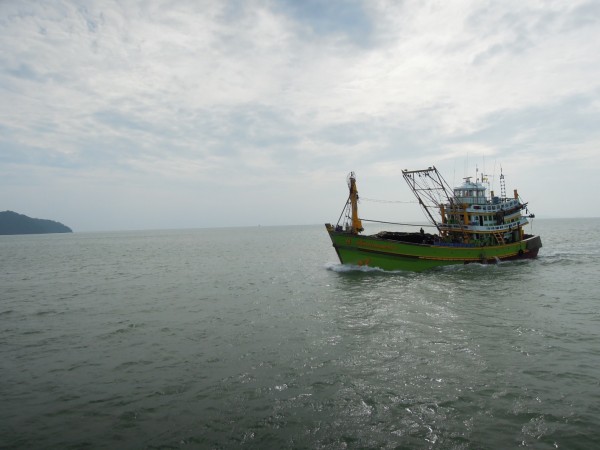 Ready for the cruise (That’s not our boat, that’s a fishing boat.) 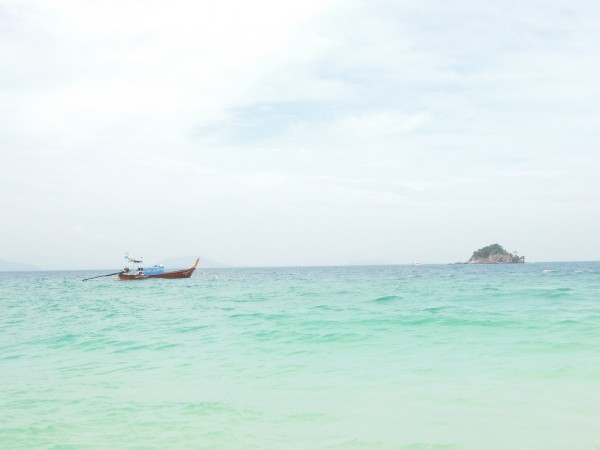 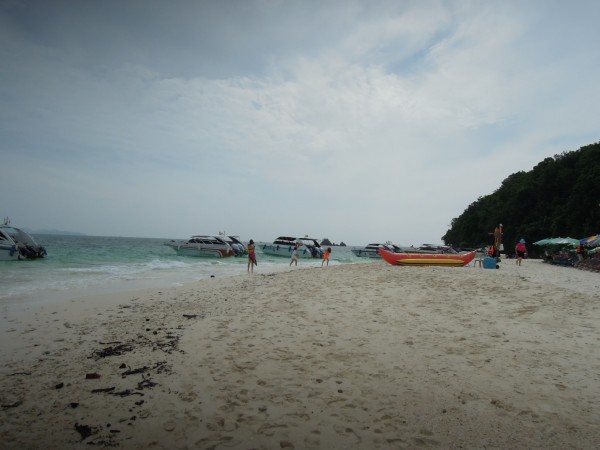 The islands tour was incredibly fun and was perhaps the most touristy thing I did during my entire trip. All I had to was book the tour, pay, be picked up at the hostel, smile at strangers, be that harmless, well-meaning Asian guy, and enjoy the islands tour.

Despite another overcast that day, the sights were still wonderful. We were transported between several coasts, including the highly popular Krabi and Kho Phi Phi. We also had the chance to go snorkelling off the coast of Maya Bay. Maybe because we didn’t go to a lot of snorkelling sites and didn’t really dive that deep, but I somehow felt like the snorkelling sites in the Philippines were much better than in Phuket. 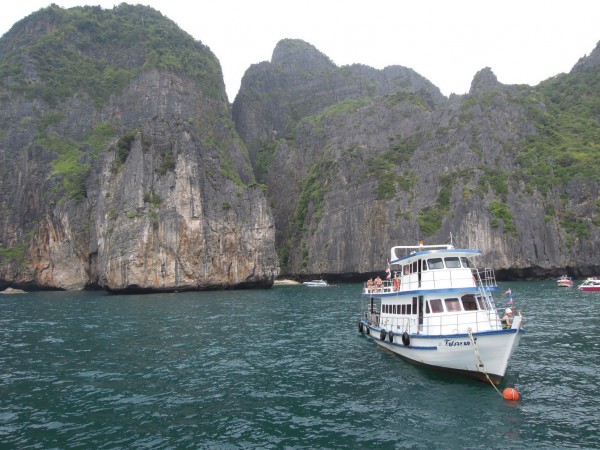 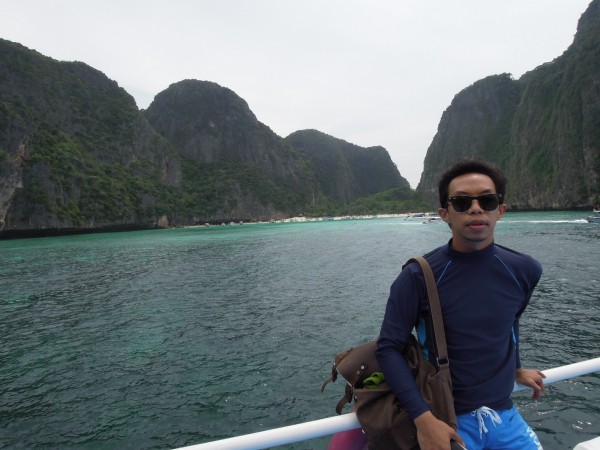 At this moment, my eyeglasses decided to go for a swim and from my open bag, jump into the ocean.

The fascinating thing about the islands of Phuket is that despite being just small islands, far from the mainland Thailand, and in fact already close to Malaysia, Thai culture still flourished in them. It was rather unfortunate though that the structures in the islands which have been affected by the 2004 tsunami have not been completely reconstructed yet. In a way, I guess, the ruins serve as a reminder of the islands’ tragic past, which, more so, should be a reminder to all visitors of the respect that should be accorded to these lovely islands and the ocean that bears them. 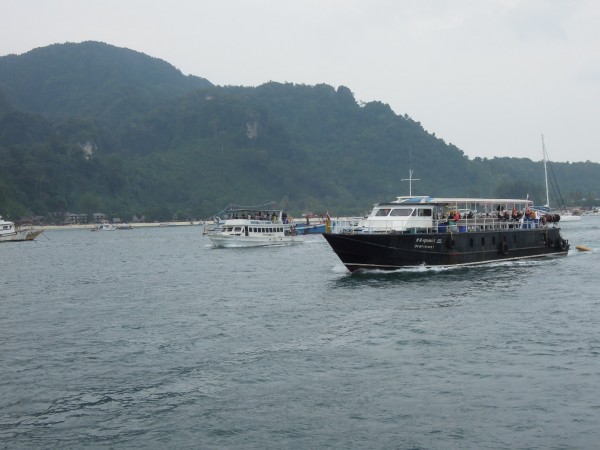 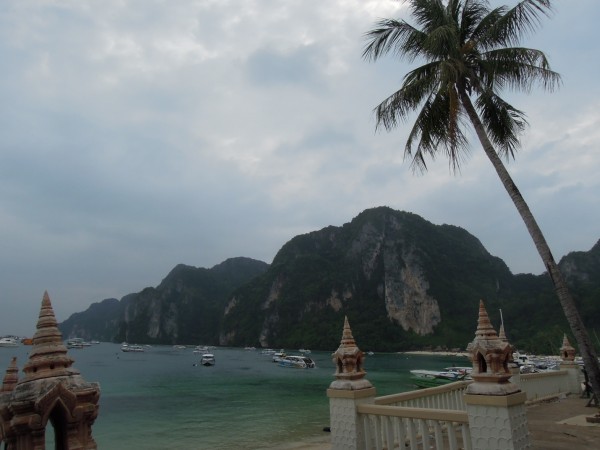 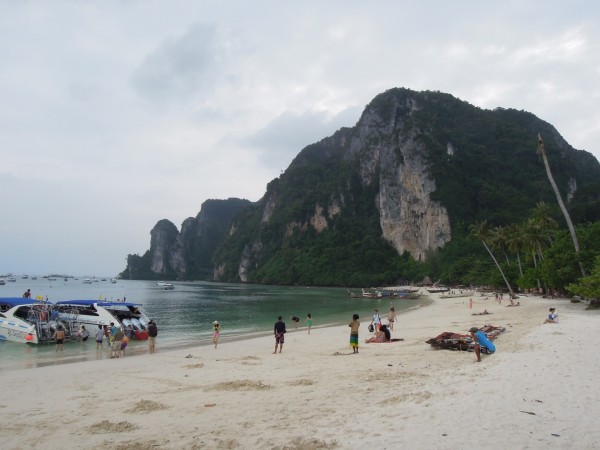 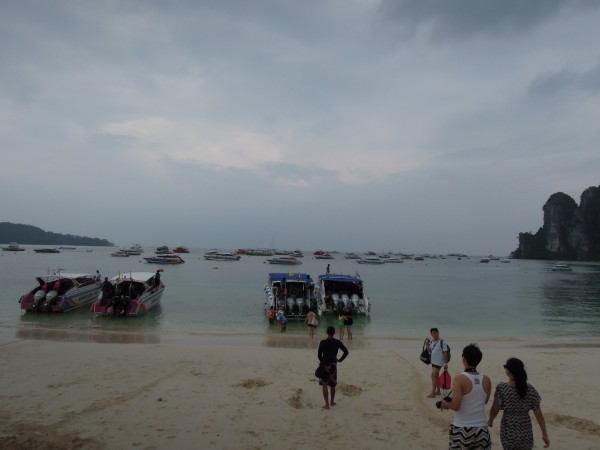 I think there were a few boats along Kho Phi Phi’s coast.

I met some really interesting people at the cruise as well. Among them were two elderly Australian ladies who were best friends and just wanted to go on vacation, and my favourite people on that ferry, a newly-wed couple from Iceland who looked like they were former UFC fighters. I mean they were so well-built even the girl could easily rip my arms from end to end. They were severely nice and sweet though, offering chips and cigarettes. Most of all, they were so in love, kissing and hugging each other and massaging each other’s ankles, I just wanted to jump off that boat. 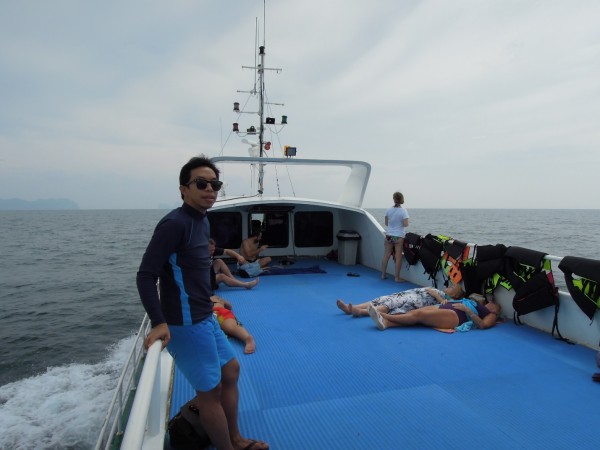 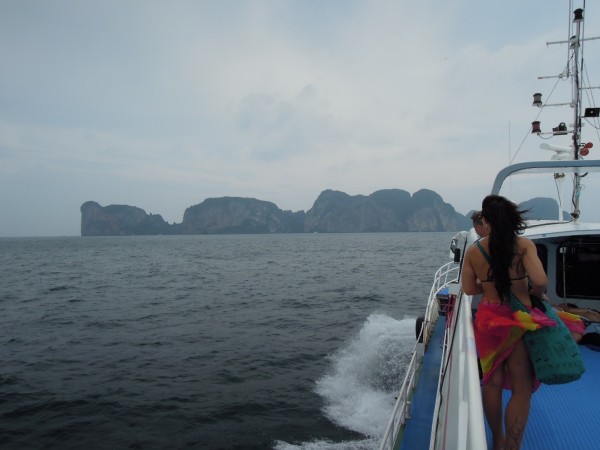 Check out those guns.

Kidding aside, the people and the sights made for a wonderful day.

Glenn, however, did not achieve much that day. While we made plans to go to Patong beach that day, I didn’t make it because the cruise took the whole day. He could have lounged around the beach though, but I guess Glenn just wasn’t the luckiest guy, as his story betrays. While preparing to go to the beach, he decided to put on his contacts. While he was doing that, one of the lenses ripped and a piece was stuck in his eye. And so there went five hours of his day and 5000 baht of his budget.

To make Glenn feel better, I and our new friend Albert (a Filipino who is now based in Canada) brought him out for dinner and drinks that night. As we were out and about exploring the crazy Phuket nightlife, we also met the cool, semi-bohemian Russians, Nikolay and Anastasia.

We spent a great deal of that night walking around Bangla, looking for a videoke place upon my insistence. Because we couldn’t find any, we just settled at some billiards bar called Dina’s Bar and hung out there until early morning. 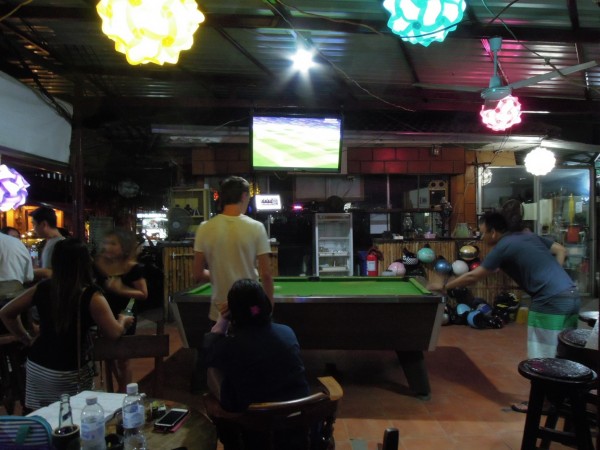 It is unsettling to go a billiards bar when none in your group is good at it.

I certainly had a great time with these guys. Too bad though for all of us, as he following day, we were all headed to different places. 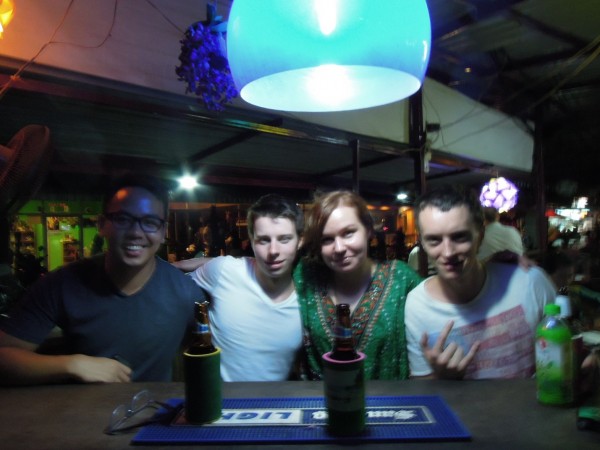 Even if you can’t read about certain happenings in Phuket in this account (because I can’t post about it), trust me, Phuket is a crazy fun place! But as the second night proved, you don’t always have to be crazy to have fun or enjoy the company of new friends. All you need is a ready spirit, an open mind, and a sincere smile to connect. And that proved to be true in Phuket.

In Bangkok, however, no matter what you do, the craziness will get to you. It will ALWAYS get to you.