Summer is almost here. And of course, the most popular image anyone can easily associate with summer is the beach: crystal blue waters, fine sand, a cool swim, and for some of us, a bottle of Corona.

Two weeks ago, my friend, Angelica told me of her hastened desire to go to the beach and get a tan, and was wondering of any possibilities that we can go to one sometime soon. The first beach I thought of were the lovely islands of Calaguas in Camarines Norte, a place I last went to April of 2010. I gladly invited myself to her getaway and we agreed that Calaguas shall be our destination. We also asked other friends to join us and we managed to convince another friend, Zye, to come along. Yes, it seems a person’s spontaneity is inversely proportional to his or her age.

Six days thereafter, or on the evening of Valentine’s Day, we, all single and happy people, found ourselves on a bus headed to our destination, Camarines Norte. Prior to that, we had already shopped for what we would be eating on the island like bread, tuna, sausages, chicharon, and other basic necessities such as Corona beers and Jose Cuervo tequila. Also, while there were fixed tours going to Calaguas, we decided to just do the whole trip ourselves because it’s cheaper, somehow more fun, and doing so won’t bind us to the schedule of other people. We were ready to rough it up.

From Manila, we took the Philtranco bus going to the town of Talobatib in Camarines Norte, a ride which lasted a little less than eight hours. As soon as we got off at Talobatib at sunrise of Saturday morning, we waited for the buses headed to Paracale, which would be our jump-off point to the islands.

In the small town of Paracale, we experienced an early reminder of the beauty of life outside the cities and the sincere kindness of the locals. While looking for a boat headed to Calaguas, we stayed at a local carinderia where the owners were kind enough to allow us to change, take baths, and organize our things. The locals were simply amazing people, and it was then that I realized that Filipinos truly aren’t just friendly or hospitable toward foreigners, they’re also really warm to other travelling Filipinos. Tita Jun and Ate Baby, the owners of the carinderia, readily told us about what to expect in the islands as well as other stories of their own. 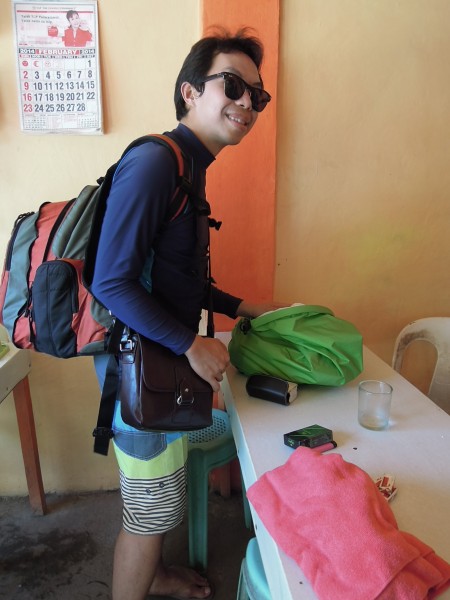 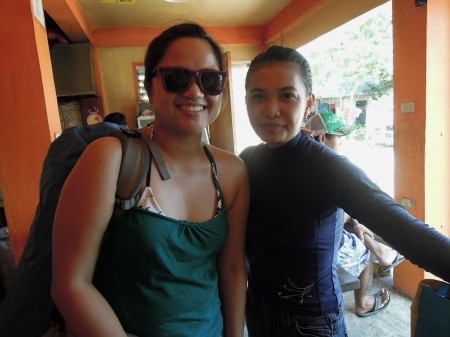 After much haggling, we were finally able to get a boat for the three of us. The boat was a small one, but we didn’t realize what a big risk it was until we were finally away from the shore and the bigger waves constantly greeted our boat as we went against it. I had an idea that waves would be a little rough, but on our way to the islands, I don’t recall the waves being that rough. It was somewhat scary for us, especially since the three of us are all from Baguio, raised in the mountains. The perils of the sea were therefore scary for us.

After two hours of the little-boat-versus-big-waves challenge, we finally reached our destination, the beautiful beach of Mahabang Buhangin in Calaguas.

A lot has changed since I was first here in 2010. There were now more huts that belonged to different resorts, and some were built as somewhat permanent structures (huts with concrete foundations). Having said that, I personally hope the development in places like Calaguas don’t ruin the community that depends on it not just for tourism, but for other means of livelihood.

There weren’t that many people on the beach, probably because it was only February, and as we were told, tourist arrival normally increases during the months of April and May. We walked around, looking for a hut and a tent, and upon finding our perfect spot and settling there, what followed is best told through pictures. 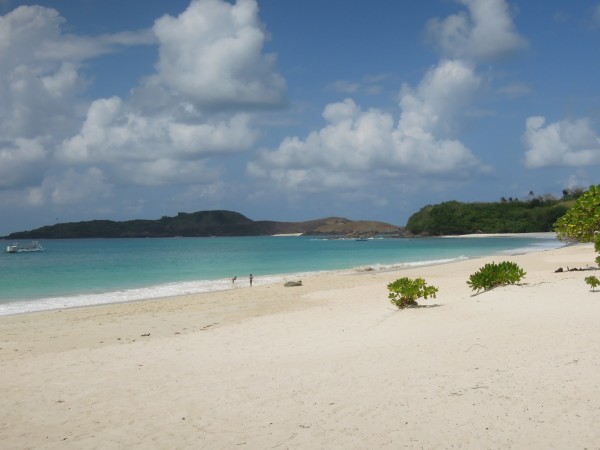 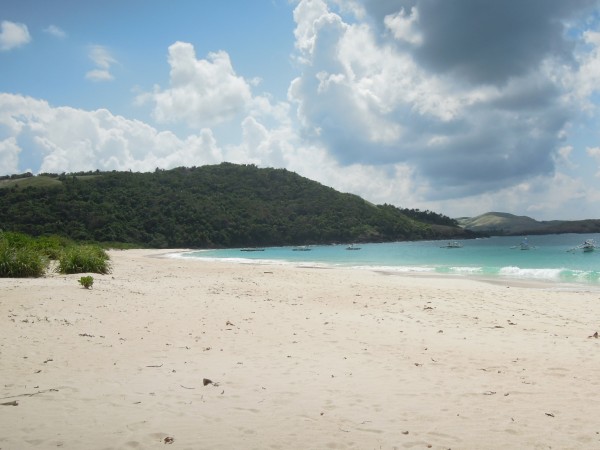 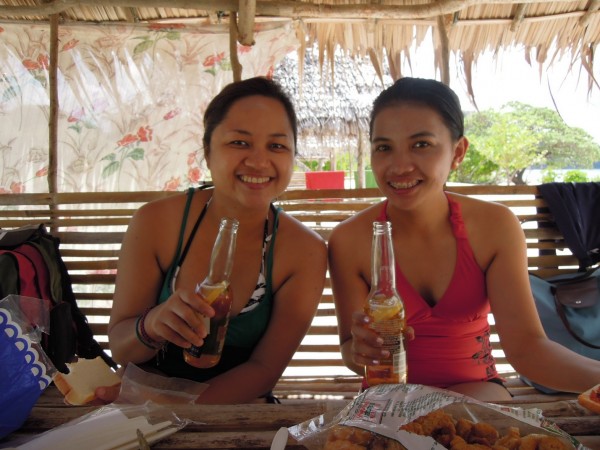 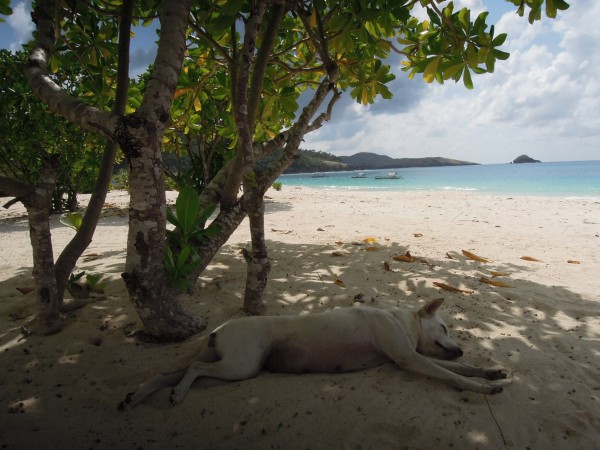 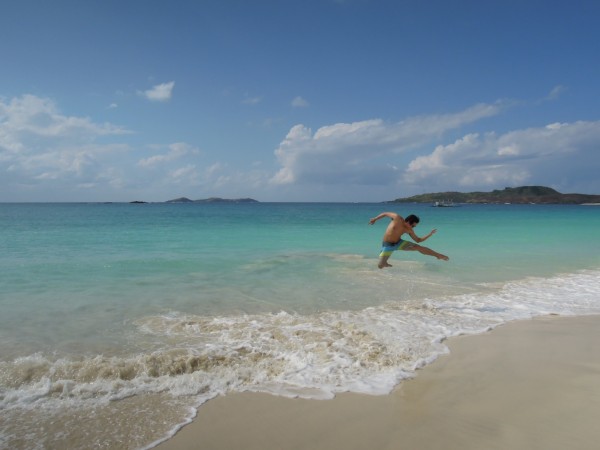 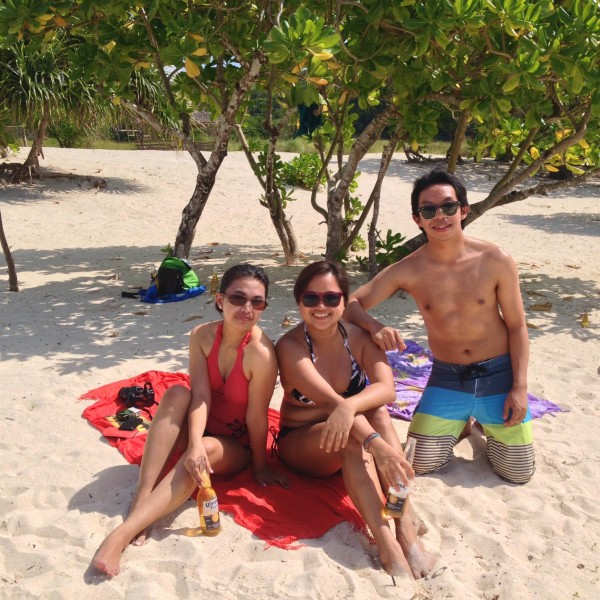 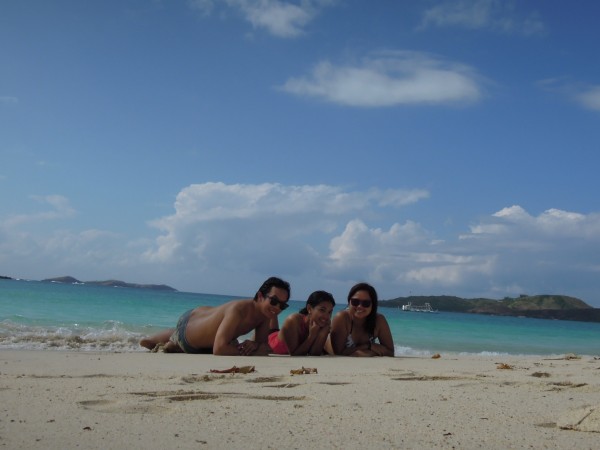 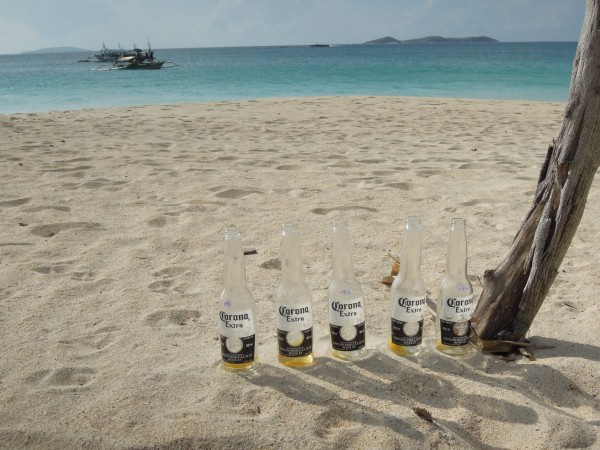 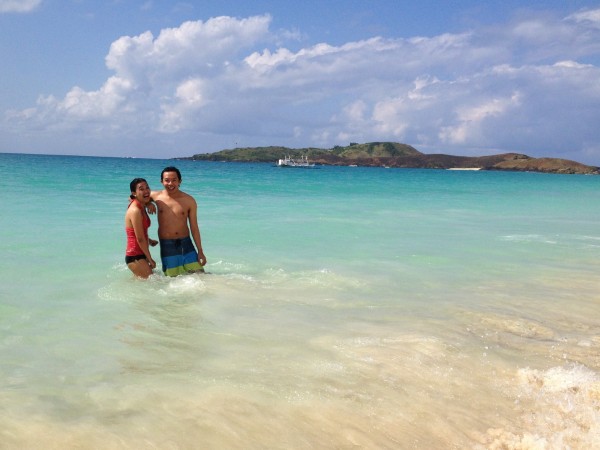 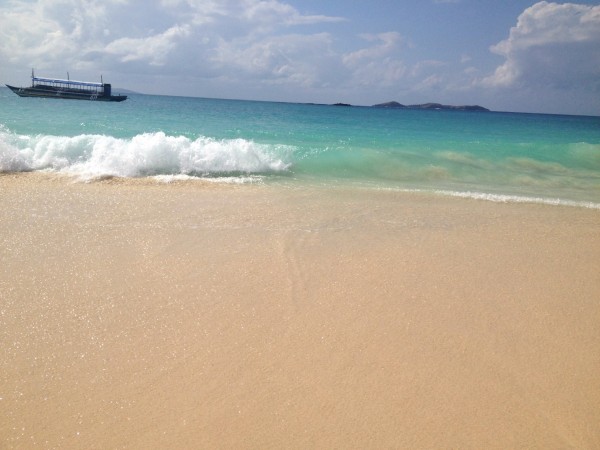 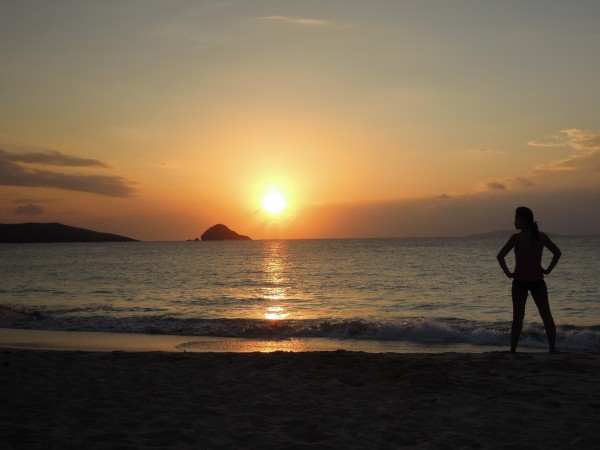 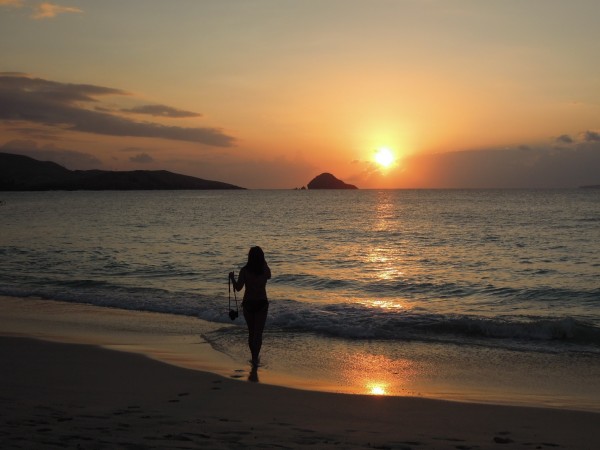 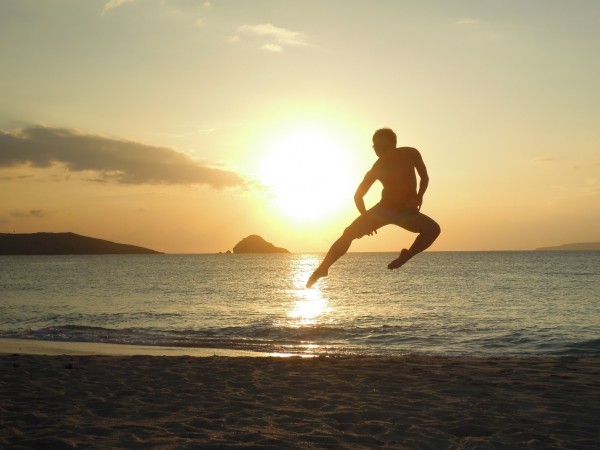 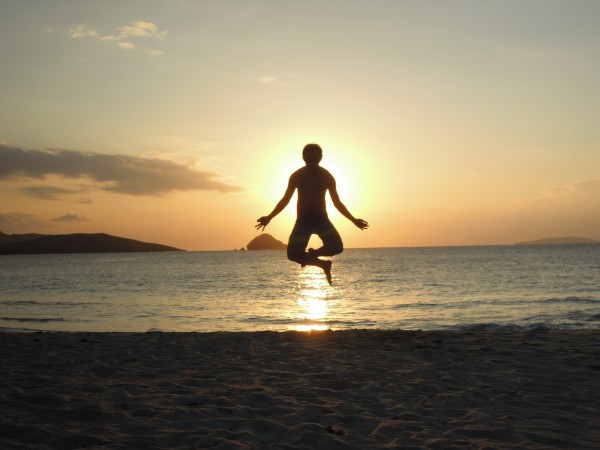 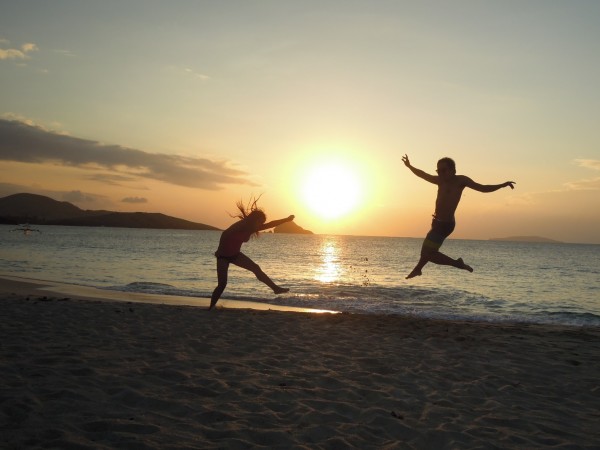 And that was pretty much how we spent the day: sun, sea, sand, and shots. And more shots.

Once we were sufficiently tired and the sun was nowhere to be seen or felt, we started preparing for dinner and freshened up at the nearby poso. As I was waiting for my friends near our hut and tent, I was talking to our boat guide, Kuya Ronald, about how I wanted to have a bonfire and how people were giving conflicting answers when I ask them about whether we could have a bonfire. Anyway, Kuya Ronald set one up for us before he left.

Our dinner was basically composed of leftover lunch (still bread, Vienna sausages, sugo peanuts, chips, and canned tuna), as we really didn’t think that we’d be hungry. We tried to be calm and reflective and zone in to a peaceful state, but the music from a nearby camp was pretty distracting. Besides, we also still had tequila, Corona, and Red Horse so we really weren’t that quiet anymore shortly thereafter. In fact, we may have enjoyed ourselves so much so that in a matter of time, we found ourselves taking shots and drinking with the other folks at a nearby camp. There we met our new friends, Eds, Rhiz, Alvin and Ranielle. 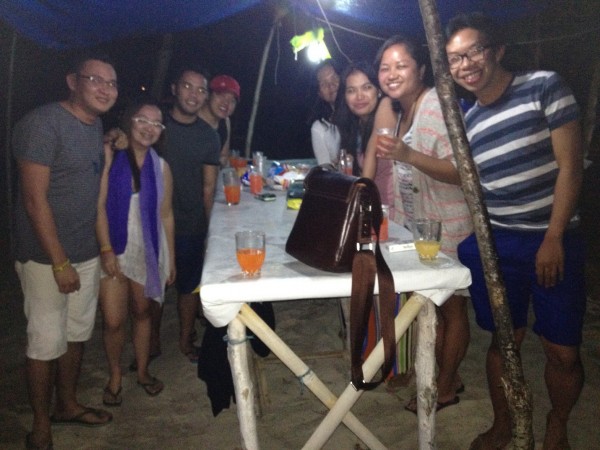 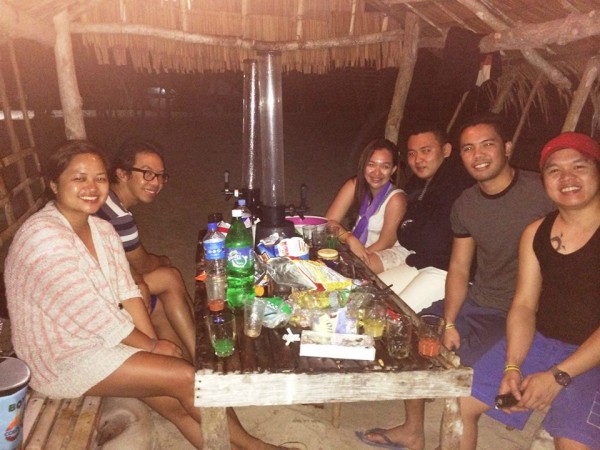 Our new friends were part of an organized tour to Calaguas. We got to know a lot about each other during the evening and really had fun sharing stories about ourselves, our work back in Manila, and eventually, about Zye. They were really cool and they all made us feel comfortable and welcome. We also learned that they were more or less doing the same itinerary that we had for the following day. I really enjoyed that evening. At some point, when we all couldn’t handle the exhaustion and alcohol (and because all the lights on the island had been turned off), we bid goodbye to each other and went back to our tents for a good night’s sleep.

Barely five hours later, Kuya Ronald was outside our tent and asking us to pack up soon so we can leave the island because of news of an oncoming low pressure area. Despite the state we were in, we had to do what we had to do, breezed through packing up and cleaning everything (I mean we really cleaned that place up), and paid our dues to the caretaker. We then rushed to our boat, and after some life vest issues, got on our little boat to begin our journey back to Paracale and avoid any sea incident caused by the impending low pressure area.

The little boat, however, merely drifted near the shore for more than an hour as its engine wouldn’t start because it was wet. I did not understand why a boat’s engine would not start if it was wet. It’s a boat. 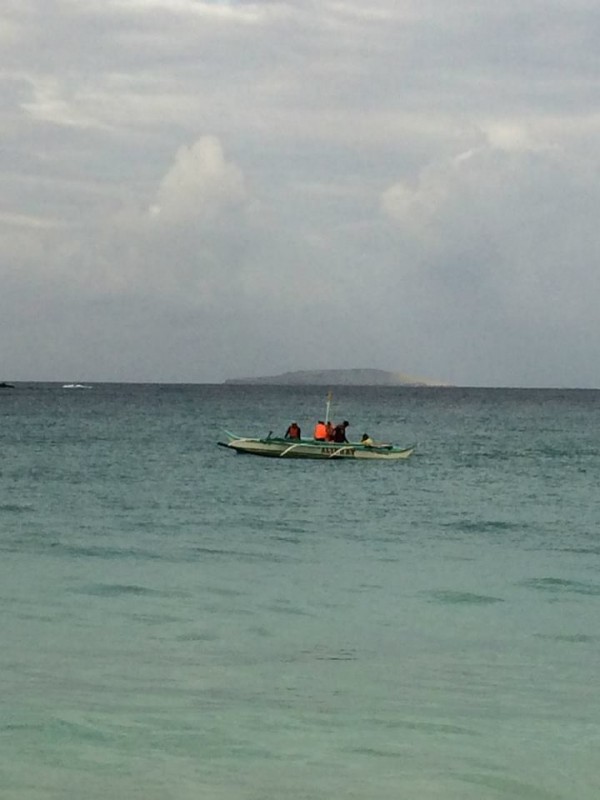 Anyway, after pleas and later on angry petitions, we were eventually transferred to a bigger boat, which turned out to a great idea because the waves swelled pretty high at sea. The boat ride going back to the mainland was a lot smoother than going to the island because this time, the boat was synchronized with the waves.

We were back in Paracale by noon, and after bidding goodbye to Kuya Arnold, wolfed down a heavy breakfast at the first carinderia we saw open. We were also lucky enough that people in Paracale felt so at ease with random strangers taking a bath in their houses so we easily found a place where we could freshen up prior to going to Daet. And with that, we bid the wonderful place of Calaguas and Paracale goodbye, for now.

The city of Daet is more or less an hour away from the town of Paracale, by van. From the van at the city proper, we had to take a tricycle going to the beach of Bagasbas, which was around four kilometres away. As soon as we reached the nearby restaurants, we saw our new friends hanging out nearby, waiting for their surfing sessions. Zye and Angelica were then convinced that they had to surf, and I felt happy to just chill and relax the rest of the afternoon.

While Bagasbas beach did not have the same light-colored sand as the beach of Calaguas, the waves, in their sheer awesomeness, were spectacular to watch. 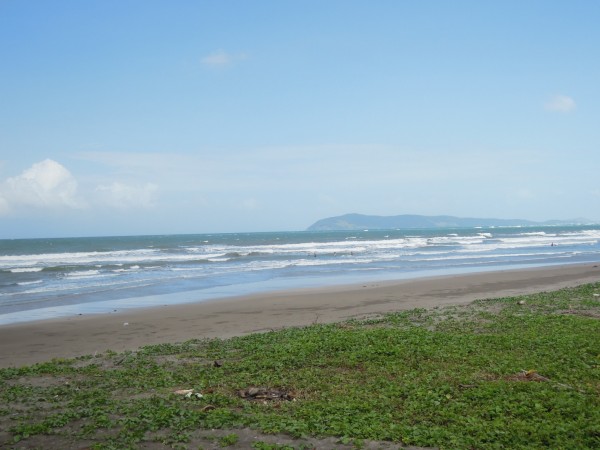 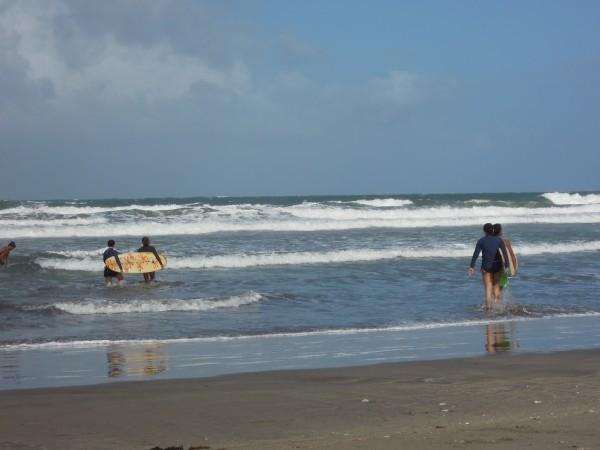 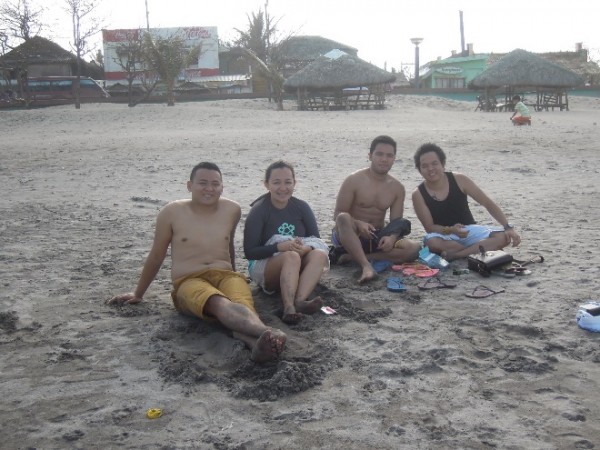 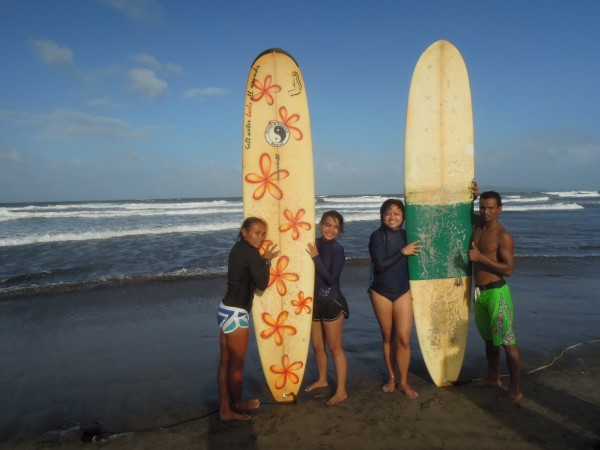 Zye and Angelica with their surfing teachers.

While the girls took a shower and got dressed, and because it was a Sunday, I also went to St. Joseph church in Daet. 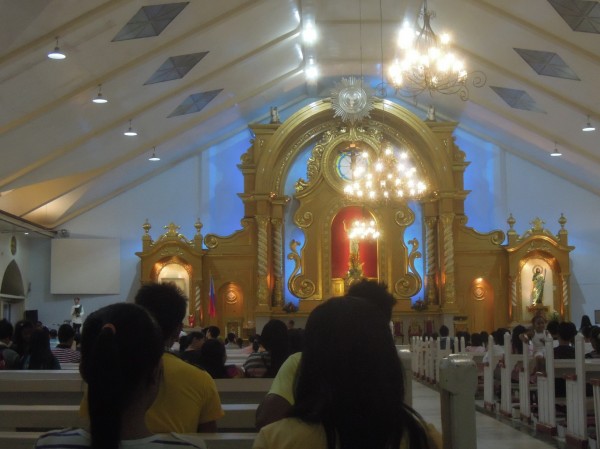 After having dinner in Graceland, we went to the bus terminal at around 8 in the evening, sufficiently early for our trip scheduled at 8:30.

While it was a tiring trip and some parts of it were pretty scary, we all really enjoyed our short vacation. Apart from the beautiful scenes you can see and the wonderful atmosphere of places like this you get to immerse in, it’s always good to experience life in other communities and get to know them, all while making other new, like-minded friends along the way.

(You can get to know Zye more in http://theperennialpassengerdiaries.wordpress.com/ and